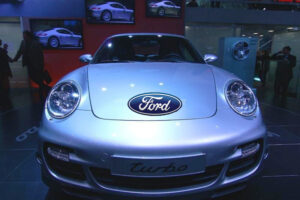 Since I was very young, I have loved cars. I drive a Porsche in the summer and a four wheel drive Audi in the slick New England winters. I love these two cars — they make my commuting hours bearable and sometimes fun. I often ponder the question — If you ripped the Porsche shield off my 911 or the four Audi rings off my A8 and replaced them with a Ford oval, would I still drive the cars? You bet I would. The quality, design, history, feel, and experience would keep me happily in those cars, even if you put a Nash Rambler logo on their front hoods. Which roughly proves a point — it’s not the branding that’s the problem with American cars, its the cars. Consumer Reports’ research verifies this — in the organization’s five categories of 2008 cars and SUVs, none of the top five vehicles come from a domestic producer.

Why can’t American companies build a great car? They are designing and manufacturing day in and day out, so what is preventing them from making something great?

I’ve heard many theories. From a high-level U.S. auto executive: “It’s the unions.” From a manufacturing consultant: “It’s the short-sighted management in the car companies — they refuse to see the future.” From an investor: “U.S. car companies are run by accountants and other assorted bean counters — they don’t love or know cars.” Here’s my thesis — America has had too few car makers over the last 70 years. Alfred Sloan did a great disservice to the country when he rolled up Buick, Pontiac, et.al., eliminating vital competition and distributed ideas. The Big Three, all based in Detroit, engaged in massive group think for so long, they lost their creativity, their difference, and their innovation. Thinking of Sloan reminds me of a favorite quote: “The biggest enemy of capitalism is a successful capitalist.”

Help me with this big question. I’d love to get your thoughts and theories.