Uma Rudd Chia is an award-winning Creative Director and head of innovation with a passion for the future. After over a decade as global and regional creative director at a variety of multinational ad agencies, she left to start up and run the creative department at Weber Shandwick, one of the world’s leading PR and Comms agencies. She is the founder of the Female Idea, a movement that champions diversity in creativity and the notion that ideas are not gender-neutral. She holds an M.A. in Digital Media Management and Technology from Hyper Island.

She was part of two best-selling acapella albums – Follow that Star and The Whole Truth in Parts. She authored two books – Hey Pastor! Your Church is Going Out of Business and Who Killed Death? And during this Covid-19 pandemic, she authored her third book, 10 Things Brands Could Do To Survive A Crisis which became a Kindle bestseller overnight.

She’s also an international keynote speaker on futurism, women leadership and creativity. As a LinkedIn Influencer, she frequently blogs on topics of female empowerments and the future of Artificial Intelligence – topics she’s passionate about. She has her own Youtube channel called Future From Fiction #F3 where she discusses innovations inspired by science fiction books and movies.

She’s a big fan of Elon Musk and Nikola Tesla, as well as the proud owner of 2 alpacas. Her biggest achievements are staying married to and being madly in love with the same man for 20 years and having 2 highly curious and incredibly vocal not-so-little makers for kids. 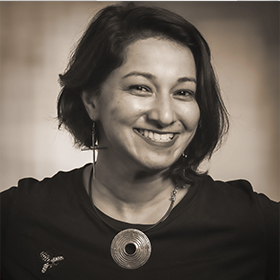