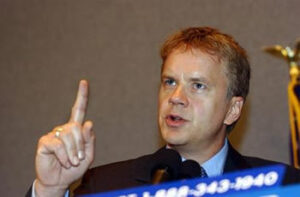 Quickly: The Internet will squeeze broadcasters into a slim niche.

I’ve often wondered whatever happened to two parts of public discourse: 1) eloquent speeches, and 2) truth-telling. I have been helping my son study American history and the other night we read two famous statements from the debates surrounding the 1850 Compromise: John C. Calhoun’s defense of the South and Daniel Webster’s response. Both men spoke in passionate but reasoned phrases — one threatening secession, the other advocating union. Marvelous reading.

I’m not equating him with Calhoun or Webster, but Tim Robbins, the activist actor, employed passion and reason to recently appeal to the National Association of Broadcasters (NAB) to be, “…guardians of the human spirit.” Agree with him or not, he bravely layed it on the line before a potentially hostile audience (as it turned out, he received a standing ovation).

All of this got me thinking about the broadcasting business. There are certain industries that are still in digital denial. They believe that their tomorrow will be like their yesterday, despite the rush of technology. I’d put the broadcasters in this group. So while Robbins is advocating reform, his speech is like an impassioned 1902 advocacy for seat belts in horse and buggy carriages — good thought, but ultimately pointless.

Broadcaster’s business model rests on control of their channel — carried on a cable, satellite, radio, or terrestrial signal. The problem is that many of those channels will be replaced by the Internet. In the future, a fat pipe running at 44 mbps (30 times faster than a cable modem) or higher will hit your basement and be routed to your TVs, radios, and every other information appliance in your house. When you turn on your TV, you’re going to have access to any content you want, at any time. Think high definition YouTube with every movie, every TV show, and every shred of content ever produced available with one click. TV channels, radio channels, and cable channels will still be around for a small number of households, just as a shrinking minority of households still use dial-up connections

There’s a very recent example of this phenomenon: America On-Line. Why did AOL go from buying Time Warner to becoming a third tier, minor portal? Because it formerly controlled a channel (dial-up) that was ultimately vaporized by the Internet. When that happened, its $20.95 per month model collapsed.

What will the wane of broadcasters mean? 1) Internet advertising is not even in its infancy, it’s embryonic. 2) Marketing power will shift from channel owners to content players and carriers (telecom and cable). 3) Ultimate choice will further splinter society — the “kitchen hearth” provided by ABC, CBS, or Clear Channel will dissolve.

So Tim, you can rail on about how broadcasters should “lead” consumers to a better world. But broadcaster’s diminishing power will mean that consumers will take themselves wherever they want to go. To restate a 1996 cliche: content will be king.

Let me know your thoughts, especially on timing — when/if you think this will all happen.