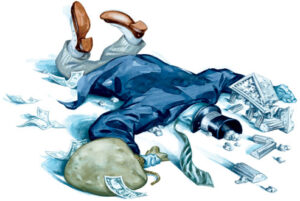 If you want to understand the financial meltdown, read Niall Ferguson’s article in Vanity Fair: “Wall Street Lays Another Egg.” It logically lays out the causation of the disaster, complete with historical backdrop.

The belief, going back to Roosevelt, and most recently promulgated by G.W. Bush, that all citizens should own a home.

Wall Street bundled mortgages into securities, supposedly attenuating risk, but actually making it hard to ultimately assess the value of the loans.

The securitization of mortgages theoretically made it possible to take on riskier loans (subprime mortgages), as long as they were bundled with better risk loans. This strategy worked as long as real estate prices kept rising and interest rates remained low.

The securitized debt was “insured” via swap options. Options were concocted by quantitative-driven financial analysts who, in their models, failed to factor in irrational human behavior. “To put it bluntly, the Nobel Prize winners knew plenty of mathematics but not enough history.” The result: flawed options models and flawed insurance.

The Chinese people and companies had high savings rates — that money was loaned to the U.S. which used the money to make bad loans, start 10,000 hedge funds, and drive private equity. “The more Asia was willing to lend to the United States, the more Americans were willing to borrow. The Asian savings glut was thus the underlying cause of the surge in bank lending, bond issuance, and new derivative contracts…”.

Take all five factors, and you come to the nub of the problem: Cheap, plentiful money beget bad loans. When the loans  went bad, the banks were in danger of failing.