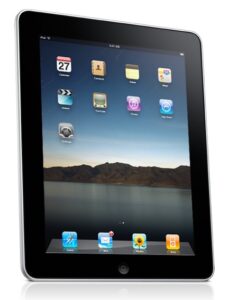 The iPad signals a fundamental change in software — and you, as CEO, should know about it.

You’re going to hear a lot of conflicting babble about what Apple’s new device means. Most of the talk will be about iPad’s impact on the media world…death of The New York Times, blah, blah, the future of movies and books, blah, blah, will Verizon offer their network, blah, blah. You may be tempted to tune it all out.

Don’t. Because the iPad has meaning for you and your business.

Your company runs on software. Whether it’s the word processor you use to write memos, or your factory’s supply chain software, or your customer Web site, your company wouldn’t last for 17 minutes without the stuff.

iPad (and the iPhone before it) elegantly combines the two models.  Software on a powerful device seamlessly (that’s the key word) cooperates with services available out on the network.

A hypothetical example would be a Wal-Mart store manager using the iPad to design shelf space. “Hey, I think I’ll put the DVD players next to the DVDs…” (swipe with finger on the iPad and change the location of DVD players on a map of the store). The software goes out onto the network, accesses Wal-Mart’s database of shelving best practices, and comes back with a message: “No, we’ve tried that before, and it confused customers and lowered the sales of DVD players by 22% — a better location would be over here…” — a section of the store map on the iPad lights up over by the flat screen TVs.

On the iPad you don’t know or care where the software is running — the experience is quick, easy, intuitive. And it doesn’t depend on the antiquated browser model — the Wal-Mart application is running over the Internet, but it’s not Web browser-based. The Web was really about shuffling pages, not running software.

What should you do? Nothing substantive at the moment. But as CEO, you should be aware of the possibilities that the iPad is presenting you — to change how software works within your company and to change the way your customers will connect to your company (Hyundai is already pursuing the latter). The first could lower cost and promote efficiency; the second could increase revenue.

Actually, there is something you should do. I would go out and buy three iPads (get the ones with 3G networking and lots of memory). Keep one for you to experiment with. Give the second one to your CIO. And give the third to your head of application development. Use them for four or five months. When September comes around, sit down with your executives and ask a simple question: “Can we use this device to improve our business?”