Skip to content
< Blogs
Home > Featured Blogs > The Social CEO Part One: Most CEOs Are Not Social 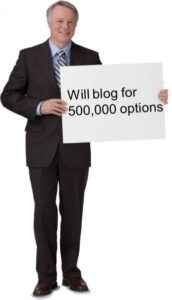 I gave a speech at Forrester’s Marketing Forum last week in Los Angeles on “The Social CEO” — why and how CEOs could use social. My talk answered four questions: 1) How many CEOs are social now? 2) Why are current CEOs not social? 3) Should CEOs be social? and 4) How can the CEO become social? I will answer these questions in four posts, starting with the first:

How many CEOs are social now?

Very few, at least in the pantheon of large companies. Here’s the research:

1) None of the CEOs of Fortune Magazine’s top 100 global corporations have a social profile. We found six defunct Twitter accounts, and one Japanese-language blog. We could discover no obvious presence for any of the 100 CEOs on Facebook or LinkedIn.

2) The CEOs of the tech companies had negligible social presences. Eric Schmidt of Google is an infrequent Twitterer and is not a blogger; Steve Ballmer at Microsoft has no blog and no Twitter account; Michael Dell is on Twitter but is not an external blogger; Mark Hurd of HP, Sam Palmisano at IBM, Steve Jobs of Apple, and Larry Ellison of Oracle have no Twitter, Facebook, LinkedIn, or blog presences that we could find.

Now admittedly I am sampling a small universe of CEOs (the largest and the most techie). And there are some very good CEO blogs — two of my favorites are Michael Hyatt’s (the CEO of Thomas Nelson Publishers), and Bill Marriott’s (CEO of Marriott).

But after analyzing and searching, we have concluded that most CEOs are not using social tools.

Tune in to my next post when we answer the question: “Why?”

In the meantime, let me know of any CEOs who you think effectively use social — I’m sure I’ve missed some good ones.