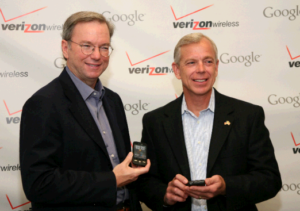 Have you wondered why the odd couple of Verizon and Google have teamed up to propose tiered pricing for wireless Internet access? It’s a way for Google to fight off App Internet.

The next wave in technology will consist of applications that seamlessly leverage the power of the local device (a smartphone, a PC, a tablet), and the power of the Cloud. iPad apps are the best early example. This model will challenge two old approaches: 1) the Microsoft model of applications running locally, and 2) the Web/Cloud model with applications running remotely. App Internet incorporates elements of both and combines them to create an improved experience.

Despite its efforts with Android, Google makes approximately 98% of its revenue and 100% of its profit from old model two:  Web/Cloud. And that approach heavily relies on the segment of basic technology that is improving in price/performance at the slowest rate:  the network. In contrast, processors and storage (the technologies powering local devices) are improving at much faster rates.

Google wants you to run your applications (search, mail, calendar) at a remote server, and in the process continually move all your bits back and forth across the network (with ad impressions delivered with each to and fro). This bandwidth-hungry approach makes Google a powerful ally of Verizon. And it explains why Google wants to raise network prices in the future and potentially give itself a network cost advantage — because its model won’t ultimately keep up in price/performance or popularity with App Internet.