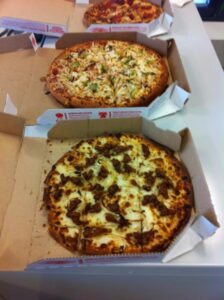 A story. Domino’s Pizza took hits over the last two years: 1) gross-out videos posted on YouTube by employees “tampering” with the food (don’t ask), and 2) harsh customer criticism of the company’s pizza on social networks. The company’s CEO decided to go on the offensive, firing and suing the wayward employees and using social to develop a better pizza. I call the latter tactic Social Sigma — using digital feedback to improve products.

Did it work? Phil Lozen, the social media specialist at Domino’s, reports that customers have been thrilled with the company’s honesty and candor. If you watch some of their videos and TV spots, they highlight tough social critics who blogged and tweeted about cardboard crust, ketchup sauce, and bland, boring pizza. “Sometimes it was difficult to hear,” said Chris Brandon, a Domino’s PR manager, “but ultimately it’s what inspired us.” It worked:  the company’s Q3 2010 revenue was up 15% over last year.

A few Forresterites and I  ordered Domino’s pizza today (shown at left). Scores were high across the board (an average of 8 out of 10)  with words like “impressive,” “fresh,” “not greasy,” and “very surprising” spoken all around. I have three boys so I’ve consumed a lot of pizza over the last ten years — Domino’s satisfied my tuned palate.

How’d the company do it? They went back to the drawing board and re-worked their product, tinkering with dozens of new recipes. When they were satisfied, they took to the web via Facebook, Twitter, and YouTube. Phil told us, “you’re not going to succeed in social media if you don’t have an intention of engaging your consumer. If you’re just out there to market — customers are too smart for that nowadays.”

If you’ve got the guts as a CEO to reveal your weaknesses and engage your customers in an honest, open discussion, Social Sigma works.