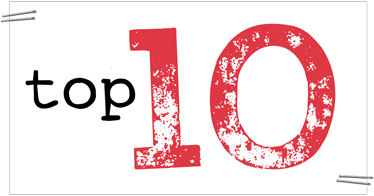 1) London. I’ve spent my business life slogging in and out of this city, never stopping to really take a look or know anything about the place. My family and I spent six days there in March: it’s clean, it’s historic, the people are hospitable, the shows are great, the walking is easy. High point was passing by Geddy Lee, the lead singer for Rush, in Notting Hill. Stay at the Covent Garden Hotel if you’ve got the bucks — understated, comfortable, centrally located, stuffy-hip.

2) iPad. It won’t replace your laptop — but I use it in all of my meetings to give me a continuous but unobtrusive window into the digital world. Best thing about it: battery life.

3) The movie The Social Network. Like all good art, critics and fans have interpreted this movie to represent the good and bad of our era. Here’s my take: Yes, we are connected at unprecedented levels, but the moral content of those connections is declining. In other words, we can have many “friends,” but we apparently have no obligation to do right by those friends. On a less serious note, I think it’s cool that someone can still invent something in his or her dorm room that touches half a billion people…

4) The Checklist Manifesto — the book by surgeon Atul Gawande. Another reminder that we imperfect human beings need simple reminders (checklists) to do the basics, so we can use our minds to focus on the more complex tasks at hand. If you’re trying to take your business from art to science, checklists represent simple scientific method that will improve process and decrease errors.

5) Smith Variant ski helmet. I’ve skied since I was 5 years old but have never worn a helmet. We had a guide last year who was a fantastic skier — and he was wearing a helmet. When I asked why, Tony replied, “I am a very good skier, but these people around me are not so good.” This helmet is warm, fits my weirdly shaped head beautifully, and has adjustable vents for more/less air. I think the brim looks goofy — I bought mine without.

6) The band Teenage Fanclub and their newest album Shadows. I’ve never liked one-voice music — probably why I never got into U2 or Springsteen. This band has great harmonies and evokes The Lovin’ Spoonful, the Jayhawks, the Beatles…

7) The movie I Am Love. This is not for everybody — it’s in Italian, it’s as far from an action movie as you can get, it could be described by some as a classic chick flick… But if you appreciate creative cinematography and an amazing, amazing soundtrack (written by John Adams), check it out. And don’t say that I didn’t warn you.

8) Vineet Nayar, CEO of HCL. When I was a kid, I thought that all of the people in charge were creative, responsible, and inspiring. Let’s just say that I’ve had my disappointments over the years. But this guy isn’t one of them. When he took over as president of HCL in 2005, he was faced with turning around a second-tier Indian outsourcer, plagued by high employee attrition and an undifferentiated approach to the market. Nayar thought differently about all aspects of his operation, injecting transparency, speed, and a laser-focus on generating unique customer value. You may not agree with his philosophy, but he’ll make you think — check out his book — Employees First, Customers Second.

9) The book Predictably Irrational. Classical economics says that we are all rational actors; behavioral economics says that we will often act irrationally but in predictable patterns. The second half of this book drags and the research is sometimes suspect, but there are some important teachings, including: the power of free as a pricing strategy, how humans employ relative thinking to make decisions, and how humans behave differently under economic norms versus social norms. One of my clients described this book as, “…an unfair advantage in business.”

10) World Cup Soccer. Not even the droning B flat of the vuvuzela could spoil this incomparable event. Forrester has thriving businesses in Spain and the Netherlands — so it made for a very confusing finals.

I hope you find my list to be useful in some way. What was your favorite thing about 2010? I’d love to get your thoughts.