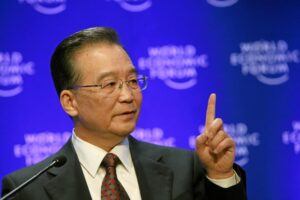 Respondents to my question included tech CEOs, a former UK prime minister, a former US senator, and the head of one of the world’s largest banks. I polled entrepreneurs, economists, and business people from many parts of the world. In all, 40 attendees answered the question. Here are the results:

A caveat: The World Economic Forum loves straight lines — it celebrates stasis and is not adept at predicting disruption. So any so-called obvious trend (e.g., China up, the US flat-lining) is embraced and accepted. Only one problem:  The future rarely cooperates.

That said, there is no doubt that the American political system is on trial in the world. A government minister from Singapore bragged to me that the Singapore/China system of “controlled capitalism” was the future — and that the gridlock in American politics highlights the major flaws in the Western approach. Most disturbingly, I had a few well-known American capitalists opine that perhaps the Chinese had a better “approach” than the US — that a little less democracy could be better for business than the “messy and divisive” American approach. This is truly the US’s “Sputnik moment” as President Obama talked about in his State of the Union speech. The whole world is watching to see if America will rise to the challenge.