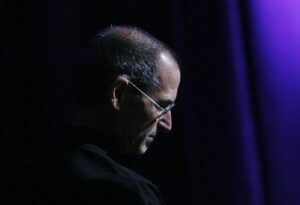 At a conference of CIOs that I attended this morning in Lisbon, all of our group were reflective and emotionally affected by the news of Jobs’ death – many heartfelt words were spoken from the stage, as they have been on stages, social networks, phone calls, and conversations all over the world today. And as we all mourned, many of us were literally holding Steve in our hands as we communicated via iPads, iPhones, Keynote, and Macs.

Steve leaves a vast and extraordinary legacy and I will let the more eloquent pay tribute. But I will make a prediction and I will express a hope.

I believe that we will look back at the 2002-2011 period as a golden age of technology – driven by Jobs at his most visionary. All of the promise of digital was finally being delivered in a way that was truly powerful, simple, and matched to human beings. I predict that we won’t see such an outpouring again for decades.

But I hope that I am wrong. My hope is that Steve inspires all of us in the technology business to stop creating confusing, poorly-designed, slow, complex, ugly, maddening products that weigh down rather than lift up the work and souls of people. My hope is that Apple’s next ten years are more insanely great than its last and that its competitors are inspired to keep or exceed the pace. My hope is that Steve’s lessons will bring about a better world.

To the Apple and Jobs families, Forrester sends its best thoughts.