Skip to content
< Blogs
Home > Featured Blogs > Oracle Had A Strong Third Quarter, But Well-Informed Buyers Can Still Get Great Deals In Its Q4

Oracle reported its results for the three months to February 29th yesterday, and it beat analysts’ expectations. Software license sales were up 15% from last quarter, and up 7% on last year’s Q3. The blogosphere’s “Oraclefreude” delight at its disappointing Q2 appears to have been premature. Enterprises’ insatiable demand for processing power and Oracle’s excellent products ensure a continuing demand for more "per core" license capacity of its flagship database products.

“Oracle is on track to deliver the highest operating margins in our history this year,” said Oracle President and CFO, Safra Catz, in the company’s press release. “Oracle can achieve these record margins as an integrated hardware and software company because we are focusing on high margin systems where hardware and software are engineered to work together.”

What does this mean for sourcing professionals considering Oracle deals in its important fourth quarter to May 31st?

Despite Oracle’s financial rebound, I’m still confident that sourcing professionals with leverage will be able to get better prices in the next three months than they’ve gotten before, provided they use that leverage wisely. Here are three reasons why:

1.       Oracle’s good Q3 was the result of sales execution and deal timing, in addition to underlying demand. Firstly, the delayed deals on which Oracle blamed its Q2 miss boosted the Q3 numbers when they eventually came through. Secondly, some sales teams encouraged clients to bring forward purchases into February, which boosted their Q3 number but reduces the pipeline available for Q4. This gives you extra power if you have discretion to threaten to delay purchases beyond May and to offer to bring purchases forward from later in the year.

2.       Multi-year Unlimited License Agreement (ULA) deals consume the pool of available revenue. Oracle has pioneered ULAs and, as I’ve written before, they are the best option for many companies (Five Tips For Negotiating With Oracle). They also benefit Oracle by enabling it to book future demand as revenue in the current financial year. However, the companies that bought ULAs in 2010 and 2011 won’t be buying those products in 2012. Even those with 2009 ULAs coming up for renewal should, if they’ve managed them correctly, have sufficient license capacity to last them until 2013. Oracle needs to persuade more and more customers to buy now what they don’t need until 2014, just to match its May 2011 numbers.

3.       Oracle’s maintenance revenue growth has slowed. It’s the revenue stream that Oracle calls “license updates and product support” that is the source of its profit and cash inflow. Its stock valuation is based on market assumptions of continuing growth, combining 22 cents of additional maintenance for every dollar of license revenue over the previous year, plus annual price increases on existing streams. Worryingly for Oracle, but encouragingly for buyers, whereas Oracle's maintenance stream grew 15% from FY2010 to FY2011, its recent number is up only 7% on Q3 last year, and less than 1% higher than Q4 last year. Figure 1 shows that the problem is on the application side, where Oracle is losing existing support revenue streams almost as fast as it can add new ones from new sales. 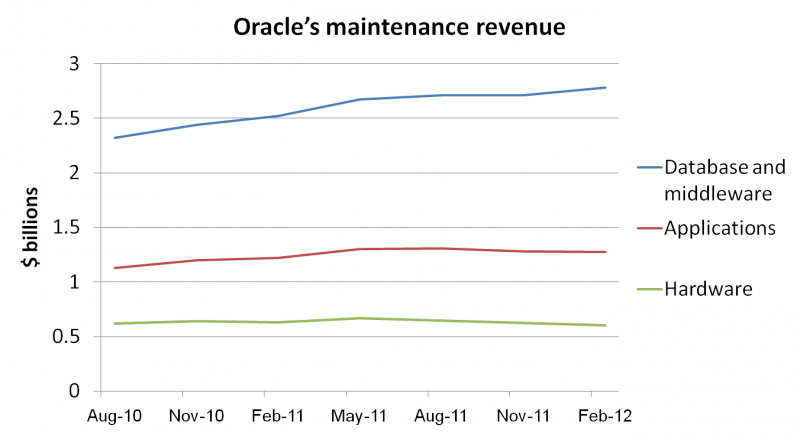 Bottom Line: Sourcing professionals have a two-month window to get better deals from Oracle than they’ve ever gotten before, but only if they can assemble, aggregate, and focus their negotiation leverage. In addition to your bartering skill and natural charm, you’ll need a deep understanding of Oracle’s business model, a solid, well-designed negotiation strategy, and your colleagues’ backing.

What is your experience? Did you see the same push for Q3 deals from Oracle reps? Are you considering a ULA? Do you see downward pressure on prices or is your sales team holding firm?

Zhi Ying Barry 11 hours ago
There’s something about entering a new year. Unbridled optimism, renewed hopes, and general positivity about having a fresh start are typical emotions. But 2023 is not like any other year. The pandemic-fueled growth that many firms experienced in 2022 appears to have come to a halt as organizations enter 2023 facing the prospect of an […]
Read More
Blog

Lisa Singer 17 hours ago
If you’re in product management, your skills are needed today! According to Glassdoor, the number of product manager job openings has increased 135% over the past five years, with up to 17,000 available job openings on the site today. Product management has appeared consistently in Glassdoor’s top ten list of job roles since 2018, scoring […]
Read More