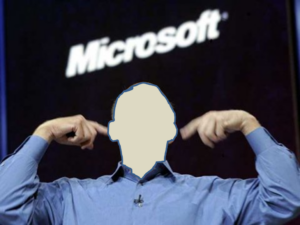 Every 10 years or so, a company in the technology industry that appears to be dead, dying, or stagnant makes an amazing turnaround. In 1980, it was Intel; buried by the Japanese in the dynamic memory business, it reinvented itself as a microprocessor company. In the 1990s, it was IBM — saved from breakup-hungry investment bankers by Lew Gerstner to be reborn as a services company. In the 2000s, it was Apple.

Here’s the case for Microsoft. One, it’s still a powerful brand, as were IBM and Apple. Two, a new generation of leadership is about to arrive, with fresh ideas and the courage to break with the past. Three, the DNA of the company lies in programming — perfectly positioning it for the next big industry wave.

Did I lose you on that last one? Here’s how the logic flows:

Over the next five years, the Web will become the AM radio of digital — always around, cheap, the lowest common denominator — but not the place where high-value commerce and content is centered. The Web is a file-based architecture; 95% of the processing happens on remote servers, with only 5% on the PC, tablet, phone, or whatever the endpoint device might be. The advantage of the Web is that the architecture is very simple, it runs on all devices, and it can be made to do lots of good work — think salesforce.com or Facebook. It’s actually quite amazing how companies like Google have pushed HTML (and antecedents) as far as they have — akin to saddling a cow and getting it to run competitive times in the software Kentucky Derby.

HTML-based Web tools have been used as a cudgel against Microsoft: emulating Office, doing a pretty good imitation of Outlook, obviating the need for Windows — classical innovator’s dilemma kind of stuff. But remember that the highest-valued technology company in the world is not huddled around the Web; its gasoline is apps. Apple engendered a hardware revolution (iPhone) which then triggered the app uprising. And the hardware (what you hold in your hand) is about to experience another explosion of power, unleashing a new generation of immersive, valuable, breakthrough applications.

And that’s where Microsoft comes in. At the core of the company remains a beating heart of software programming — the skills and expertise that produced Windows 7, Office, and the Xbox. The new CEO can use that culture to surround the Web, catch the new wave of devices, and usher in the next great generation of applications that seamlessly interpolate with cloud resources and data. The app Internet ecosystems are forming. The No. 1 priority for Microsoft’s new leader is to ensure that the company owns one of those ecosystems. There are no other priorities.