Ok, confession time: Those who know me well know my upbringing holds a deep dark secret. Yes, I was born in West Virginia, and grew up in Kentucky. Yes, my dad worked in the coal mines (OK, he was an electrical engineer, and only went down below once every couple of weeks . . .). On finding out my origin story, my college roommates took to calling me “hick” (I think they still do when I go back for reunions). I gotta say, it still amazes me how quickly y’all zips right back into my patois when I’m around like-minded individuals. But I gotta tell ya, there’s a lot to like about where I grew up: horses, bourbon, and basketball come to mind. And then there are the feuds and rivalries: UK versus IU (we don’t acknowledge Louisville); Maker’s Mark versus Jack Daniel’s; Hatfields versus McCoys. Where I grew up, we don’t mind a good brawl every now and then . . .

And that’s exactly what I’m seeing in our 2013 Forrsights Developer Survey when it comes to how developers prioritize the mobile platforms they develop for. In the survey, we asked all developers about the types of application development technologies they’ve worked with in the past 24 months. Of the 1,611 North American and European developers we surveyed, 478 (just under 30%) indicated that they had worked with mobile apps or mobile web sites. We then asked those developers a variety of questions about how they are using mobile technologies. One question we asked them was how they prioritized their development efforts across different form factors and operating systems (see Figure 1). The overall data is interesting, but so is the data inside the top-line stats:

Our takeaway: Android developers specialize on Android, and iOS developers specialize on iOS, and they tend to like their own kind. That’s one reason we recommend specializing developer skills if you choose to go with a native client approach. It’s fine to have project managers, information architects, testers, and ops professionals working across multiple code bases, but when it comes to developers, you’ll get better productivity if they keep to their side of the Big Sandy River. 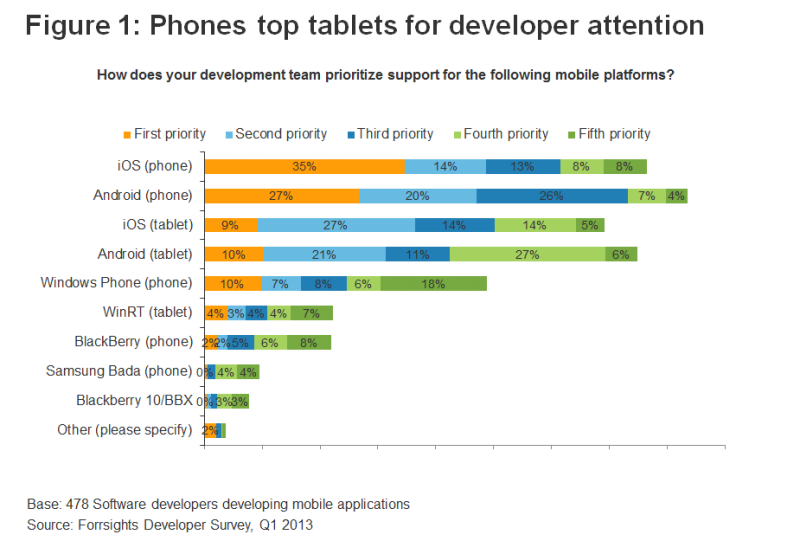 I’ll be exploring this data and other best practices for organizing your mobile development teams on October 17 and 18 at the Forrester Forum for Application Development & Delivery Professionals. The Forum will showcase the top technologies, skills, and practices that you will need to take a leadership role in the development of world-class customer experiences at your company. And even though it’s in Indianapolis, I’ll do my best to be polite to those with an inferior basketball culture.