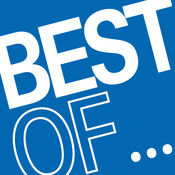 As we all head off into the New Year, I wanted to look back at what I consider to be the  “Best of…” for 2013. Note that the following is based entirely on my personal opinions — it is not grounded in Forrester’s research or formal positions. Here’s what I liked from 2013, in no particular order…

One:  My favorite book of the year is 4/5s bummer and 1/5th hopeful. Erik Brynjolfsson and Andrew McAfees‘ Race Against the Machine outlines how prodigiously improving digital technology is going to put millions out of work, from truck drivers to radiologists. But the authors end on an up note:  human beings cannot win the race against the machines, but they can excel if they race with the machines — that is, use digital to be better doctors, geologists, factory workers, or chefs. There is hope for mankind…

Two:  The Withings Scale. A great bathroom scale that is WiFi connected. When you stand on the scale you get weight, body fat percentage, and body mass index. And the results show up in an app on your phone/tablet/computer that gives you long-term trends against your goals. Playing off the old saw, “You can’t manage what you don’t measure,” this aggregated data gives incentive to hit targets and to stop eating and to start exercising. And if your narcissism is in overdrive, the scale will blast your latest weight into Twitter or Facebook…quickly qualifying you as your friends’ most annoying friend.

Three:  Even though my kids keep leading me back to Jay-Z and Kanye, I am stuck in country land when it comes to music. My favorite album of the year was Kacey Musgraves‘ Same Trailer Different Park. Before you start throwing insults, I agree that this music is probably only one or two cuts above Taylor Swift. But there’s a ripping, telling subtlety here that rises above the typical country schlock. And yes, I’m still a blues guy at heart…so I would be remiss if I didn’t mention the definitive Duane Allman retrospective, Skydog.

Four:  The Sonos wireless stereo system points to a future when everything will be controlled by the brilliant device in your pocket/pocketbook that was once called the smartphone. From the app, you can play all of your music throughout your house, or stream from Pandora, or listen to radio, or turn off speakers in different rooms. Sonos has obsoleted every stereo component you own — and shifted control to your digital devices. Very cool, very flexible, the future.

Five:  Being a nerd, you won’t be surprised that I thought two space movies were the best of the year (I haven’t seen the flurry of last minute arrivals like American Hustle) — Gravity and Europa Report. Both combine great effects, believable characters, and full stories. I particularly liked the realism of Europa — the writers and directors set out to make a science fiction space movie that is populated with professionals and scientists that you might legitimately find on a NASA mission, not the caricatures and idiot crew members that are typically found in Hollywood confections like Prometheus. Not to go negative, but I’ve got to tweak Inside Llewyn Davis. The critics are falling all over this morose, pointless, boring, inaccurate portrayal of what was a vibrant, creative, pivotal time in American music and culture. The emperor (the Coens) and their followers (the critics) have no clothes on this one. Don’t waste your money seeing this movie — spend $10 and buy something of real value — the album (which tangentially inspired the movie) Inside Dave Van Ronk.

Six:  The fingerprint scan on the iPhone 5S. I don’t believe the tech world has recognized how important this new technology will be. Apple, Google, Amazon, Yahoo, Microsoft, Samsung, et.al., are in a race to authenticate users — what I have called the “ID Wars” in my last few speeches. Not only is Apple’s approach a fast and cool way to get into your smartphone, it sets the stage for the company to jump forward in the race to bypass the tiresome login/password routine that we are all forced to endure over and over again every day. Apple could release the application programming interfaces for the scan, enabling iPhone users to get into apps, corporate resources, email, commerce sites with a quick swipe of a finger. By doing so, Apple would hit the sweetest of the sweet spots — increasing convenience while also increasing security.

Seven:  My favorite time-wasting YouTube video of the year (aside from the general brilliance of Key & Peele) had Justin Timberlake and Jimmy Fallon making fun of an annoying aspect of referential social networking. This video could presage a genre of parody that takes off on the irony-free, “look-at-me” absurdity that underlies much of the post-social world. Some clever comedian could fill two Comedy Central specials dissecting the wonderful world of Facebook.

That’s my short list. What were your “Best Ofs” for 2013? Leave a comment and let me know.

Best wishes for the Holidays and for the New Year.