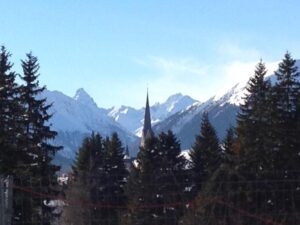 1) I always go to Davos with a quick poll to ask my fellow attendees. This year my question was: “Is Edward Snowden a traitor or a hero?” 32 attendees voted “traitor” while 21 voted “hero.” Europeans and young people tended more to the “hero” side. Everyone involved with the U.S. government (senators, congressmen, ex- or current administration officials) unanimously voted “traitor.”

2) When I asked Marissa Mayer of Yahoo what she would ask President Obama to do to regarding security and privacy, she had a simple answer — “More transparency.”

3) When I asked my technology panel how much of a citizen’s digital information he or she could expect to be private in the future, the answer was “90%.” That would mean that 10% of your emails would be viewable by a third party — but you wouldn’t know which 10%. I’m not sure customers would tolerate these levels.

4) The BBC held a live TV session on the future of U.S. power. Most of the Davos panels are parodies of politeness, with mass agreement and lots of smiles. Not this panel, which included Senator John McCain, ex-U.S. Democratic Congresswomen Jane Harman, Turki Al Saud, former head of Saudi intelligence, and Alexey Pushkov, Russian academic and commentator. McCain and Harman engaged in a miniature enactment of Washington pettiness and unproductive infighting — demonstrating for the world just how low the political discourse has fallen in the U.S. The Saudi and Russian then began preaching the U.S. on human rights, which ratcheted up the tragicomic atmosphere. The whole thing made for high theater, but lowered belief in at least some of the world’s leaders.

5) Shirin Neshat, the ex-pat Iranian artist, received a special award. I loved her two quotes: “Picasso said that, ‘Art is the lie that let’s us see the truth.'” and “We Iranians overseas have been holding the torch of Iranian moderation — now it is time for President Rouhani to unite the country as a model of peace, justice, and democracy.”

6) According to a panel on the future of healthcare, 50% of world economic growth over the last 100 years has derived from medical improvements. But remember…the panel was populated by doctors…

7) The Wall Street Journal hosted a free-wheeling CEO lunch. Some nuggets: 1) The U.S. now has a competitive advantage over Europe due to its high energy prices and low technology innovation. 2) Brazil’s growth is being stunted by its sub-par educational system. 3) China is now the biggest car market in the world — Carlos Ghosn noted that 20 million cars were sold in China in 2013 versus 16 million in the U.S.

8) From an excellent panel on organizational agility…1) According to Booz, 80% of company problems are not caused by natural disasters, or regulatory change, or competitive pressure — they derive from faulty strategy. 2) The Starwoods CEO moves his executive team around the world every two to three months — mainly in Asia. Why? That’s where his customers are. 3) Why do some companies do better than others? The research shows that they are able to learn faster than their competitors.

9) One in 11 people in the world work in the travel industry. The business will create 75 million new jobs in the next 10 years.

10) Why is unemployment in Austria and Germany so low? The apprentice system, which is centuries old, provides high-skilled, high-quality labor for technical jobs in high-value industries like automotive. But it would be a hard system to replicate — because of its deep cultural roots.

11) According to Eric Schmidt of Google, 80% of the world’s cyber-espionage is coming out of China. Does that include the NSA? I’m not sure even he knows.

12) Bitcoin was a big topic. Robert Shiller the economist had a quick analysis:  “The currency takes us back to the dark ages because of its instability. But humans are fascinated in anything whose price changes quickly. So as a monetary system Bitcoin is a disaster, but as a promotional vehicle it is fantastic.”