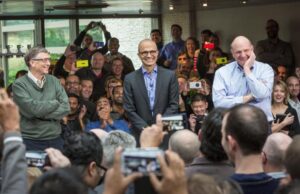 Microsoft’s new CEO, Satya Nadella, must take three actions to make the company relevant in the Age of the Customer:

1) Attack mobile. Customers are undergoing a mobile mind shift — an expectation that they can get any information or service on any device at any time wherever they may be. Nadella must establish Microsoft as the third mobile ecosystem, legitimately competing with the formidable franchises of Apple (iOS) and Google (Android). Amazon, with its profit-free business model, will spend unlimited dollars to win the third spot. And a hoard of challengers, from Samsung to Dell to Lenovo will generate confusion and a shower of Hail Mary products in desperate efforts to gain a foothold. Nadella must flawlessly execute in a space that is unfamiliar (he’s a cloud guy) and unforgiving. The good news is that Microsoft has a rich history of building powerful ecosystems (e.g., Windows, .NET). But this time around it must approach the market as a challenger, not as the dominant player. Which brings us to…

2) Rebuild the Microsoft culture. Firstly, Nadella must revive the company’s ability to fast-follow. It never had innovative DNA — in its best days it grabbed product ideas from others (Apple, Netscape) and perfected, refined, and commercialized them. Examples include Internet Explorer, Windows, Office, and Windows NT. Secondly, the new CEO must shake the culture free of its controlling, monopolistic tendencies and make it customer-obsessed — vibrating to the subtle market demands of a newly powerful and dynamic customer base. It can no longer dictate the market — it must anticipate it, respond to it, and move at the speed of its increasingly fickle and unpredictable customers.

3) Keep Bill and Steve out of his business. To wrench Microsoft back into contention, Nadella must break a lot of furniture and china – and that will be difficult to impossible with Gates and Ballmer on the scene. When Lou Gerstner took over IBM in 1993, John Akers departed. Gil Amelio was ejected when Steve Jobs returned to Apple. The presence of Bill and Steve will confuse lines of leadership and thematically pull the company back to the past.

I don’t put the chances of Nadella’s success high. While he may be a terrific manager, his insider status will handcuff him. Only if Nadella can ruthlessly take control, advance an original point of view, and aggressively flush the plaque out of the company’s arteries will he have a shot at creating a new Microsoft that can thrive in the mysterious, tumultuous, Age of the Customer.