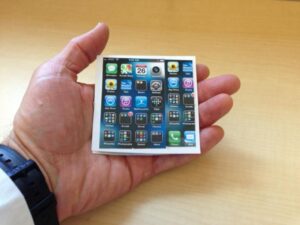 Ever wonder what’s going to happen next in smartphones? After the conservative iPhone 5 and the relentless and surprising onslaught of Samsung, it’s clear that Apple’s next move in the space will have to be revolutionary. Ennui has seeped into the minds of some Apple faithful as they have become bored with their phones, and envious with what’s happening over the fence in Android’s backyard. The iPhone 6 (not due for another 15 months) will be a signal moment for Tim Cook and team — it must astound and amaze, all without you-know-who leading the charge. This will either be a first step toward Sonyland or a breathtaking victory for the new regime. There will be no room for the careful incrementalism of the 5.

Without any inside knowledge of Apple or other makers’ plans, I believe that the coolest future smartphones will fold. To demonstrate, take the current iPhone 5, lengthen it by 1.5 inches, widen it by an inch, make it 30% thinner, then fold the whole thing in half. In your hand (as per my mock-up above) you would be holding a square device with a full screen of icons, video, pictures — ready to make a call or open an app. This form factor would fit easily into a shirt breast pocket or the front pocket of a pair of jeans. But when you open the phone, you would have a massive screen (there’s display glass on both sides of the device) with a diagonal of nearly seven inches. That’s bigger than the non-folding Galaxy Note 2 which is often called a “phablet” in polite circles and “the sandal” in rougher company. The jump in screen size would enable applications that don’t work on smaller smartphones — especially reading-intensive, typing-intensive, or detail-intensive uses like maps. And the large screen would comfortably carry advertising, enhancing the value of the iOS ecosystem for third parties and tipping the Mobile War in Apple’s favor.

Now this won’t be easy. The hinge technology will have to be an engineering marvel, and making the folding crease of the screen invisible will pose problems in materials, optics, and touch technologies. But the payoff is enormous: 1) it puts competition on the defensive; 2) it gives customers incentive to upgrade out of the non-folding iPhone generations; and 3) it positions Apple to dominate the emerging mobile engagement market — a world in which the mobile device continually interacts with people as they move through time and space. An iWatch would be cool — but a small smartphone that could transform into a large phone would re-spark consumers’ love affair with Apple and enable the company to re-take the innovation high ground.