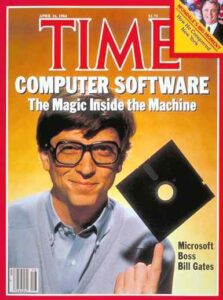 I’ve grown up with and lived with Bill Gates as the most influential technology leader of the era. Even though he has been slowly backing out of Microsoft for the last five years, his actual July 1, 2008 departure from the company is a milestone worth reflecting on.

What is his single most important legacy? The ability, through monopolistic business practices, to make Microsoft’s products global, de facto standards for business and consumers. This created a standard ecosystem of documents, spreadsheets, printer drivers, programs, browsers, and operating systems which enabled people to communicate in a single “language” — greatly easing the inherent limitations of computer systems.

Unlike oil, pharmaceutical, or steel, monopolies are a necessary ingredient in the technology business. It’s only when de facto standards like Windows or de jure standards like HTML become dominant that usefulness soars. Why? Because the more people that use a technology increases its utility exponentially, not arithmetically.

Bill had the vision to see this future and he possessed the competitive drive to force his technologies into monopoly positions in the marketplace. He has not been an innovator in technology — in polite circles we would call him derivative, in less genteel terms we would call him a plagiarist. Gates has been a business innovator, not a technology innovator.

Yes, many got damaged along the way. Windows marginalized Apple. The Office bundle pithed Lotus, Borland, and WordPerfect. And just when it appeared that Microsoft would lose in the Internet era, the operating system (Bill’s favorite monopoly tool) was again deployed to propagate Internet Explorer throughout the world, destroying Netscape.

This wasn’t all just bullying. Bill’s products were not elegant or particularly innovative — but they were just high quality enough to attract the critical mass of users to get the monopoly rolling. And once the monopoly expanded, the software developers would arrive, lured by Microsoft’s developer! developer! developer!-friendly embrace, assured that their work would have the widest possible audience.

No, it wasn’t just about altruism. Gates recognized that while this standard ecosystem would be a boon to users, it would also generate unparalleled profitability for Microsoft. And these gravity-defying margins inevitably attracted regulators — who wrong-headedly applied the old rules of monopoly to a new world.

As I look back, I think that Gates’ “constructive monopolism” most closely parallels Thomas Edison’s. They both created pretty good technologies and then worked, using many means, to get them accepted by more users than their competitors. Tesla and Jobs are two sides of the same coin.

Why hasn’t Microsoft caught Google? Why has Steve Jobs clawed his way out of his grave to be adored once again? It’s because Gates over the last five years has moved on to philanthropy — and taken his formidable legacy with him.

What are your views on Gates? Do you think that Microsoft can thrive again without him? I’d love to get your analysis…