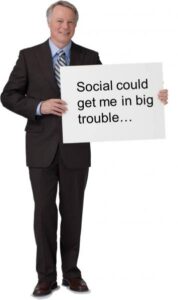 CEOs have not embraced social for three reasons:

2) Constraints specific to CEOs, and

3) The present social model is mismatched to CEOs.

The average age of the world’s top 100 CEOs is 59. This places them in the “typewriter and whiteout generation” — many years removed from AOL Instant Messaging, Facebook, text messaging, and other early and late social technologies. Current CEOs lack affinity, knowledge, and comfort with social — limiting their usage.

CEOs face unique constraints. Their companies possess carefully crafted messages emanating from public relations, advertising campaigns, and investor relations — a CEO could dilute or scramble these messages in a weak blog or Twitter moment. Regulatory issues surround the CEO — Sarbanes Oxley, Regulation Full-Disclosure (“Reg FD”), FTC guidelines, European Union regulations — which limit his ability to speak his mind. CEOs always seek to minimize risks of litigation, loss of intellectual property, offending customers, offending investors, angering employees — all increased with a social profile. Imagine if Lloyd Blankfein, the CEO of Goldman Sachs, was blogging from 2004-2008 about the high quality of his company’s investments — those posts would be Exhibit A in any case against Goldman.

Finally, the social model doesn’t fit with most CEOs. Conventional wisdom says that an acceptable social profile includes six tweets/day and one blog post per week — let’s call this “social heavy.” Most CEOs don’t have the time or content to measure up as Seth Godin has noted. For a moment, make yourself the CMO of General Electric. Now walk into Jeff Immelt’s office and tell him: “Jeff, we want you to make six short statements every day to the world, and one larger statement to the world every week.” That could be a career-limiting conversation…

With the exception of a small minority of brilliant thinkers, smart social networkers, and publishing-oriented personalities, the social heavy model is a recipe for blowhardism. Think about it — how many people do you know with the erudition to make 30 worthwhile short statements per week, and one valuable long statement per week? Einstein, a famously private individual, would have had a massively unpopular blog — because he would have never posted. But the one post he did put up would have been the most important of the 20th century.

So we know why CEOs aren’t social: 1) Age, 2) Risk and regulatory constraints, 3) Time, and 4) The social heavy model breeds blowhards — not a place where the CEO should dwell.  Which brings us to our third question — “Should CEOs be social?” I’ll take that up in my next post.