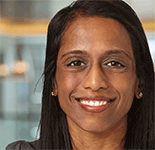 Today’s market is increasingly led — and dominated by — digital titans like Google, Amazon, Apple, Facebook, and Alibaba. Why? The power of data combined with the network effect can explain the underlying power of these companies. That basic logic alone does not describe the dominant role of titans, however. Otherwise, players such as eBay, Twitter, and Yahoo would have a greater role in today’s economy.

In this episode, Sucharita Kodali explains why these specific tech titans have taken over — and seem to be broadening their dominance of — the digital economy and what that means for everyone else.

The Secrets To Becoming An Effective Change Catalyst

What It Means 6 days ago
Meaningful change in a company doesn’t have to come from the top. Anyone — regardless of seniority or title — can bring it about, say Vice Presidents Meta Karagianni and Peter Ostrow. On this week’s What It Means, they discuss how B2B professionals can successfully initiate change and give a preview of their keynote session at Forrester’s B2B Summit EMEA.
Listen Now
Podcast

What It Means September 22, 2022
B2B marketing leaders will face intense budget scrutiny as they plan for 2023. But making reactive, cost-saving decisions could undermine long-term gains, cautions VP and Principal Analyst Barbie Mattie. On this week’s What It Means, she discusses Forrester’s 2023 planning guide for B2B marketing executives and its spending recommendations.
Listen Now