Early last week, I attended the first annual “Canonical Model Management Forum” here in the DC area. A number of government agencies as well as several of the major banks, insurance companies, credit-card operators, and other private-sector firms attended the meeting. There was one vendor sponsor (DigitalML, the vendor of IgniteXML), and the meeting was hosted at a CSC facility. There were a number of presentations by the attendees about their environments, what had motivated them to establish a canonical model, how that work had turned out, and the important lessons learned.

But What Is A Canonical Information Model?

In the first day of sessions, I heard a number of definitions of canonical modeling, but most were similar to Forrester’s:

A canonical information model is a model of the semantics and structure of information that adheres to a set of rules agreed upon within a defined context for communicating among a set of applications or parties.

Forrester’s recent survey data shows that canonical modeling is actually quite common among those pursuing SOA: 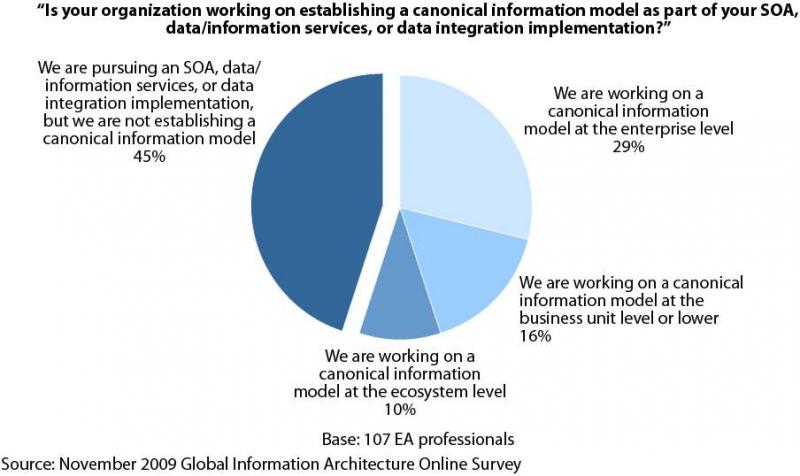 But why were the agencies and private-sector companies at this meeting so concerned about how to manage their model? They all have significant information exchange requirements, not only with business partners, but also internally and with peer agencies. Whenever a number of applications or parties need to exchange information, agreed formats are required. But managing the agreed formats over time, what with multiple versions, multiple formats for similar information, and multiple applications consuming the same model and needing to manage change impact, it gets complicated.

That’s where this forum focused – how do you really manage the models and metadata over time, and how do you make them easy enough for developers to consume that they really will use them, rather than just build more point-to-point interfaces? Multiple versions of these modeled formats have to be managed over time, along with the mapping and transformation rules to the internal applications that produce or consume exchange messages.

Historically messages or even file-transfer were the dominant means of conveying these XML payloads, but in recent years, SOA has added another important context which benefits from rationalization of the model of “data in motion” through the communication infrastructure. As one attendee said, “SOA does not solve your data problems, it exposes them.” Of course, one can treat a message queue or ESB as a “tower of Babel” which conveys payloads between endpoints in a way that is semantically equivalent to point-to-point interfaces. But several of the information architects who spoke were able to articulate key benefits from rationalizing the information model to a canonical form:

There Were Some Controversial Points

Some interesting points of controversy came up around the topic, reflecting the different perspectives in the room:

Still, Many Best Practices Emerged From The Attendees’ Experience

But there was much more agreement, than not. Several common observations or best practices emerged from the discussion:

So What About Tools?

Given that a vendor of a tool that addresses some of these issues (DigitalML) sponsored the meeting, it’s not surprising that the subject of tools came up several times. Those who were using IgniteXML had positive things to say about it, especially its unique level of support for a wide range of issues for both modelers and developers. One idea IgniteXML got particularly right is in providing tool support that makes it easy for developers to consume the model, given the critical path this plays in overall acceptance and success of canonical modeling initiatives.

Yet Forrester’s data shows that most information architects use more familiar tools for building their canonical information models (caution – this is a small sample size, so not necessarily indicative of the broader market, except in a very approximate way): 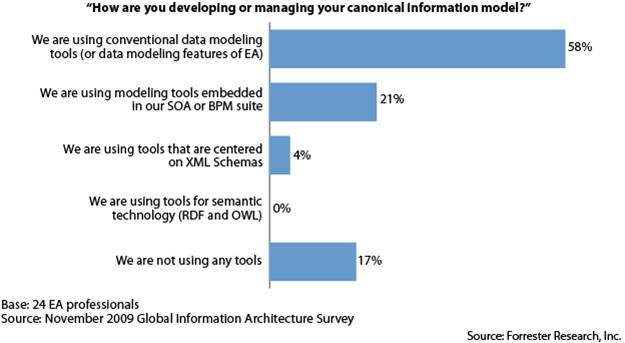 Notwithstanding this information, several attendees described their earlier efforts of managing a canonical model using conventional data modeling tools as having been only partly successful, with a lack of rich support for XML Schemas being one issue, and a lack of support for developers to consume models as XSDs being another. Another problem of the conventional tools approach was that it tended to put the EA group into a tightly-coupled workflow with developers that slowed down time-to-market for new applications that caused model impact – a death knell to accelerating adoption. Those that had moved to IgniteXML had found it much superior to those other tools, but were somewhat puzzled that as they looked around for alternatives that do the same thing, they couldn’t find any that were directly comparable. So clearly this is an immature tools category, which has not yet caught significant attention from the industry.

We did hear two other tools mentioned as not being so directly comparable, but still focused in the same general area of working with XML Schemas: Progress Software DataXchange Semantic Integrator (DXSI), and Liaison Contivo. Contivo was mentioned by one architect as a tool his firm had used in the past to try to implement its canonical modeling strategy (among other things), but that they had moved to IgniteXML and found it better suited to that requirement. Architects who mentioned DXSI did not make a direct comparison, but instead remarked that it seemed to be positioned somewhat differently than IgniteXML, and that it might be more complementary than competitive. We shouldn't read too much into these remarks, since these attendees were either current IgniteXML customers, or prospects, so don't represent a broad and general sample.

Forrester will be doing more research in this area, as clearly there are many questions we need to answer, such as what tools are really in this space and how they compare, as well as further investigation of best practices. Dave West and I will do that work. Please contact us if you have a case-study or a product we should evaluate.

Kate Leggett 21 hours ago
Ready to give up on your CRM deployment? Before you do, you should know: CRM is a huge market. It is valued at $63.91 billion today and projected to grow to $145.79 billion by 2029, at a CAGR of 12.5%. Eighty-two percent of enterprises use CRM. Yet when I surveyed hundreds of business and IT […]
Read More
Blog

Dario Maisto 1 day ago
Enterprise resource planning (ERP) vendors are pushing client organizations to replace their on-premises ERP solutions with cloud-based digital operations platforms (DOPs). As a result, ERP discussions are filling up the agendas of CTOs and procurement officers. The increasing number of inquiries that we at Forrester receive is a clear signal that the market is moving, […]
Read More