Fast Access To Data Is The Primary Purpose Of Caching

Developers have always used data caching to improve application performance. (CPU registers are data caches!) The closer the data is to the application code, the faster the application will run because you avoid the access latency caused by disk and/or network. Local caching is fastest because you cache the data in the same memory as the code itself. Need to render a drop-down list faster? Read the list from the database once, and then cache it in a Java HashMap. Need to avoid the performance-sapping disk trashing of an SQL call to repeatedly render a personalized user’s Web page? Cache the user profile and the rendered page fragments in the user session.

Although local caching is fine for Web applications that run on one or two application servers, it is insufficient if any or all of the following conditions apply:

To overcome these scaling challenges, application architects often give up on caching and instead turn to the clustering features provided by relational database management systems (RDBMSes). The problem: It is often at the expense of performance and can be very costly to scale up. So, how can firms get improved performance along with scale and fault tolerance?

Unlike local caches, which reside in the same memory space as the application, elastic caching platforms (ECPs) are deployed on two or more nodes (sometimes hundreds of caching nodes are used by Web giants such as Facebook, Amazon.com, Bing, and eBay), usually in a cluster dedicated to caching. This adds a caching layer to your Web architecture (see Figure 1) that can be used to cache transient data from your Web application and/or persistent data from your data stores.

Software infrastructure that provides application developers with data caching services that are distributed across two or more server nodes that 1) consistently perform as volumes grow; 2) can be scaled without downtime; and 3) provide a range of fault-tolerance levels. 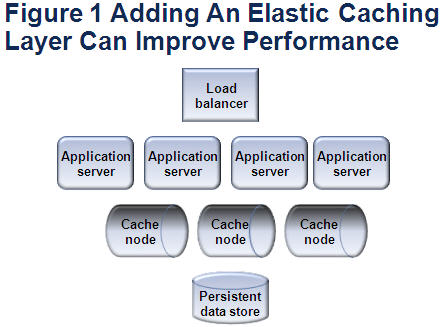 Elastic caching platforms are the next natural progression in caching (see Figure 2) because:

Elastic caching platforms are highly configurable based on how you need to balance performance, scale, and fault tolerance. 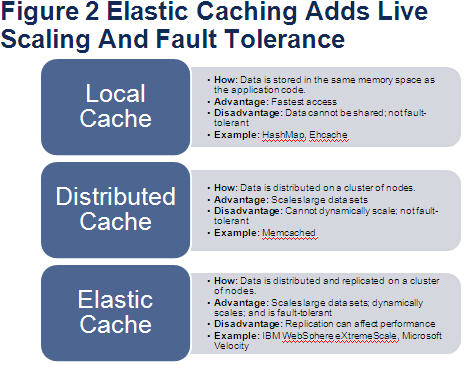 Most of the platforms that offer elastic caching also offer code execution. It is not much of a leap to see how a cluster of nodes used for caching could also host and execute code. This is akin to how RDBMSes have stored procedures and triggers that can perform operations or process data on the server where the data resides. For applications that operate on large chunks of data, it is sometimes more efficient to run the code where that data resides rather than moving the data across the network to where the application resides.

Forrester adds code execution to the definition of elastic application platforms as:

Software infrastructure that provides application developers with data caching and code execution services that are distributed across two or more server nodes that 1) consistently perform as volumes grow; 2) can be scaled without downtime; and 3) provide a range of fault-tolerance levels.

Even though many of the platforms offer code execution, most firms are primarily using caching features to improve Web application performance. WIM: Elastic Application Platforms Must Become Cloud Application Platforms While most of these platforms offer code execution in some form, they must evolve rapidly to offer more elastic application services for cloud computing such as Microsoft’s AppFabric. The cloud is all about elastic infrastructure. The next big thing in cloud computing will be elastic application services (see Figure 3). 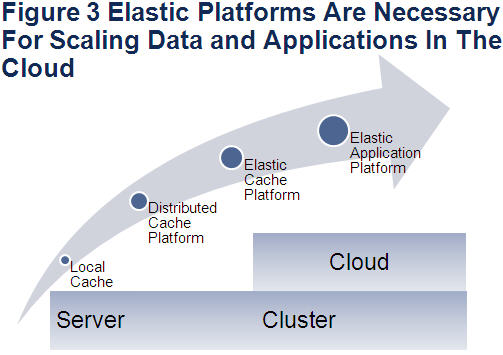