Skip to content
< Blogs
Home > Featured Blogs > Can We Learn From Pixar?

As I fly to IT Forum in Las Vegas, I am reading with interest the latest copy of Wired Magazine. Within the normal collection of interesting geek-fest, I stumbled upon a story about Pixar.

It appears that making films is a bit like software projects. They tend to be late, cost too much money, and the value of the project is hard to determine. There is one picture company that does not follow this trend. Since their inception, Pixar has gone against the Hollywood Norm, delivering nine films and nine massive hits. Wouldn’t it be great for application development professionals to be as successful, delivering fantastic projects that are both successful and of high value? So what can application development professionals learn from Pixar?

Pixar have built a fantastic company with great people working on very creative and imaginative projects. But four things stand out as things app dev pros can learn from:

Taking these ideas and applying to development:

Jeffrey Hammond and I are working what it means to build a world-class development team. We would love to hear your views…

Dave “the Woody” of software development… 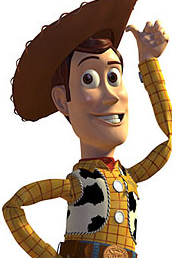