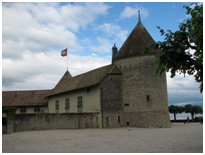 Having temporarily relocated to Eastern France – far from Paris and closer to Switzerland and Italy – I recently had the pleasure of experiencing my closest Cisco TelePresence site in Rolle, Switzerland, on the north shore of Lake Geneva for a discussion with Paul Mountford, President of Cisco’s Emerging Markets Theatre.  Cisco’s Emerging Market’s strategy has focused on what they call “country transformation,” which revolves primarily around increasing the penetration of broadband.  For FY11, Cisco will shift the message from country-wide transformation to something that rings closer to home (literally and figurative) with talk of “life-changing” stories through “life-changing” networks.  While still a little lofty, the message resonates deeper than country transformation, which speaks primarily, if not exclusively, to high-level government officials.  More a topic for Davos than for a boardroom or a living room.

The life-changes that Cisco strives to enable still require broadband networks.  And, those networks are only as compelling as the services and content that pass over them – video, unified collaboration, cloud computing.  But those services are only possible with broadband to begin with – creating a chicken and egg phenomenon that needs to be broken in many countries, particularly those non-competitive telecom sectors where the incumbent provider faces little pressure to innovate.  For example, Costa Rican telecom operators still enjoy monopoly status, and restrictions around convergence in South Africa limit the playing field for DSL and other broadband services. However, there is hope.

Government officials in emerging markets feel the pressures of population growth and increased urbanization – both through their constituents and personally.  There are now 21 megacities worldwide – defined as cities over 10 million inhabitants – and that’s up from 2 in 1950 and still only 3 in 1975. The issues faced by these cities are well-known – notably public safety, energy and water needs, and of course transportation.  Government officials are keenly aware of the need to resolve these issues both for themselves and their constituents.  And, many are doing so through “smart city” or IT- and network-based initiatives.  In fact, Cisco’s biggest wins for telepresence in emerging markets have been in the public sector, particularly governments in large cities where the time and cost of conducting in person meetings is prohibitive.  This hits very close to home for government leaders.  According to Mountford, if you want to conduct five meetings in a day in a city like Sao Paulo, Brazil, you would need a helicopter.  While I’ve not priced a helicopter recently (if ever), Paul asserts that the price of Cisco’s TelePresence is still cheaper than a helicopter.  Telepresence, for these guys, is a life-changing story that brings home the need for better network access – and for the required regulatory environment to foster it.

While I’ve been researching and writing about “smart” initiatives in emerging markets, I still found it somewhat surprising that the public sector was a leader in deploying telepresence.  So, I decided to take a quick look at some of Forrester’s data from our Forrsights Budgets And Priorities Tracker Survey, Q2 2010.  And, in fact, it’s true: 54% of public sector IT decision-makers include video technologies – video conferencing, video analysis and other technologies – as one of their top technology priorities, compared with only 47 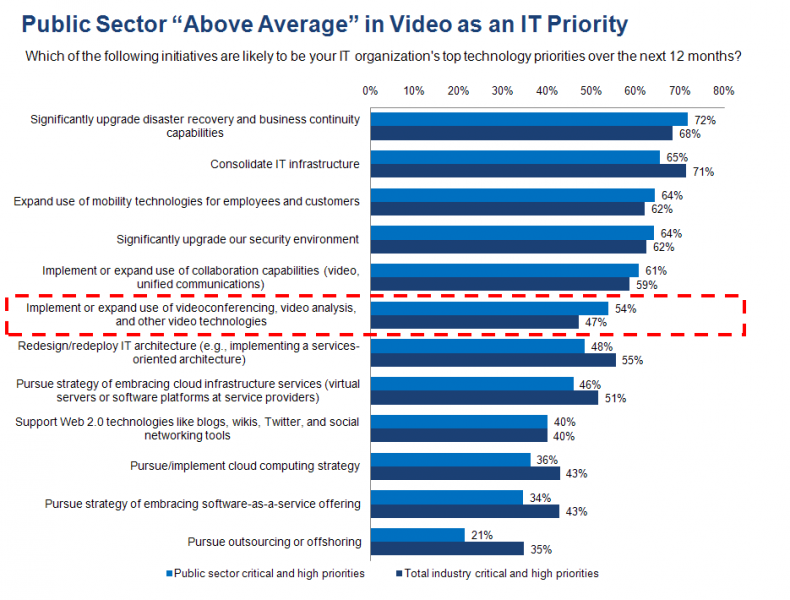 Public sector innovation is not an oxymoron.