“Winning the Future” was the theme of the recent US State of the Union address.  With the global economy and new education performance rankings as our “sputnik moment,” the president urged Congress to invest in the future – and in education.  As put it in the speech,

Maintaining our leadership in research and technology is crucial to America’s success.  But if we want to win the future -– if we want innovation to produce jobs in America and not overseas -– then we also have to win the race to educate our kids.

So what exactly was the sputnik moment, or one of them?  In the recently released OECD Program for International Student Assessment (PISA) rankings, the US didn’t do so well.  US students were average performers in reading (rank 14 in OECD) and science (rank 17) but well the below the OECD average in mathematics (rank 25).  The new top fliers in the PISA study are: Shanghai, Korea, Hong Kong, Singapore, Finland, Canada, Japan and New Zealand.

According to the OECD report,

Education is the single most critical investment to raise the long-run growth potential of countries. In the global economy, the performance of education systems is the yardstick for success, particularly in light of the fundamental technological and demographic challenges that are re-shaping our economies.

With increased globalization and competition on a global scale, the US isn’t the only one facing a “sputnik moment” and not the only one turning to education as one of the ways of responding.  In the UK government’s recent Spending Review, the Education Spending Review actually resulted in increased budgets – with per student expenditure between the ages of 5 to 16 expected to increase annually.  This contrasts with the Justice and Policing Spending Review in which the Ministry of Justice’s resource budget will be reduced by 23 per cent by 2014-15.

And, an increasing portion of that spending will go toward technology.  According to Forrester’s Global IT Budgets and Priorities Tracker, Q2 2010, 36% of IT decision-makers in education report overall IT spending increases of 5% or more.

While some governments are protecting and even increasing education budgets, not all of the spending will come from the public sector.  According to a report released by the Indian Human Resource Development (HRD) Minister, India’s expenditure on higher education is expected to grow nearly 13% annually in the next 10 years – driven primarily by the private sector. The trend in household contributions to education, and in industry partnerships and private sector education funding is not unique to higher education.  According to Eurostat, private funding has increased as a percentage of overall funding sources across all levels, notably almost doubling in the UK. 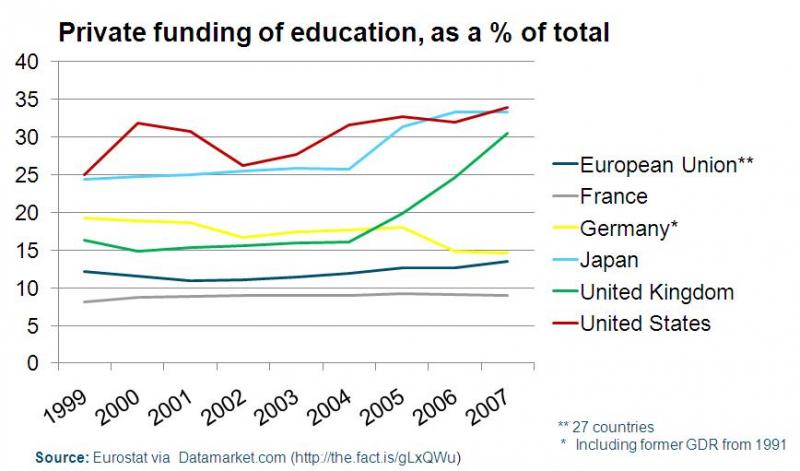 This combination of sputnik moments and new sources of funding bring opportunity for technology vendors.  With global IT spend of roughly $34 billion, education is clearly a business opportunity.  Take a look at my newly published Forrester report: Schools Move Beyond The Basics: Competition Will Drive Technology Into The Education Market.

The Twelve Tales Of Leadership

Phil Brunkard 3 hours ago
Leadership in essence is about persuasion – of winning people’s hearts and minds. Leaders must connect with empathy and emotion to lead, influence and inspire. Stories connect with us emotionally. And our emotions drive our decisions subconsciously. We do this before we apply logic and intellectual reasoning to justify the decision we already made subconsciously. […]
Read More
Blog