Twenty three years ago I arrived with a backpack and my best friend.  Last week I went back.  The city was as welcoming this time as it was the last, although the circumstances of my visit – and certainly my accommodations – were vastly different.

Pamplona is a city of about 200,000 inhabitants in Navarra, in the North of Spain.  It is best known for the running of the bulls or, as it is known locally, the Festival of San Fermin, which many of us were first introduced to in Ernest Hemingway's The Sun Also Rises.

The bulls were not what brought me to the region this time (although they were the principal reason for my first visit).  Last week I participated in e-NATECH, a tech industry forum organized by ATANA, an association of local ICT companies in Navarra.  From what I saw in both the audience and across the city, Pamplona is clearly a front-runner in terms of ICT (and bulls as I recall from my first visit). 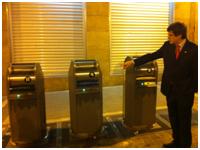 The city, as described by Councilman José Iribas Sánchez de Boado, is focused on innovation, a big part of which is technology-based – from free Wi-Fi in the city center, including 21 hotspots in bus stations, public parks, and the main square, to pneumatic garbage repositories throughout the old town (see photo) to a paperless administration (or almost) and an e-government and Web 2.0 strategy, including (of course) the city website, as well as a Facebook page and presence on Twitter.

These new channels expand the “The Council Listens” service or Citizens’ Information Services, similar to the US 311 services.  While social media expand access to younger generations, they also serve as cheaper channels to citizens than some of the alternatives such as Pamplona’s new “registrars” or town hall extensions across the city.

The city offers a number of services via SMS such as emergency notifications by neighborhood and notification prior to the towing of your vehicle (presumably with time to react before incurring the expense of recovering your car from a city lot).  The latter seems to be particularly useful and potentially lucrative if the city chooses to charge for the service.

Crosswalk signs throughout the city count down time until crossing is safe.  And, the city is implementing public transportation arrival prediction, and a program in which downtown residents can sublet their parking spaces during the day when they are empty and there is need for parking in the center.

But financial times are not great. How do they fund these initiatives?

Given the state of the Spanish finances and pressures on government budgets at all levels, how has the city undertaken these new initiatives?  How are they able to invest in new technology infrastructure and applications?  As discussed in my report “Getting Clever About Smart Cities,” there are a number of creative business models that enable tech adoption.  Pamplona has been rather entrepreneurial and has leveraged several of them: external funding, revenue sharing and concessions to vendors/developers, and shared services.

External funding. The Region of Navarra received Structural Funds from the EU as part of a regional development program.  With the funds the region has focused on:

Many of the Pamplona initiatives have been showcase projects.

Revenue sharing. The city has also been creative in revenue sharing, giving concessions to developers of parking and other infrastructure projects throughout the city.  These agreements alleviate upfront capital costs and share risk across stakeholders in a project.

Shared services.  Here Pamplona is certainly out in front.  Back in 1985 the cities of Pamplona and Lodosa founded ANIMSA, the Navarra Association for Municipal Information Technology, as a shared services provider.  The association has grown to provide shared ICT infrastructure and applications across municipalities in the region, with about 130 cities currently participating – sharing the costs of technology adoption and ongoing operations and maintenance.  Shared services include: purchasing management, technology infrastructure management, organizational and process consulting in support of new projects, various technology solutions for e-Government including web projects, as well as user support and training, and a center for remote services.  ANIMSA is currently also implementing a cloud computing capability.  And, while always subject to competitive procurement processes, it is celebrating its 25th anniversary this year.  So join me in wishing a happy anniversary to shared services in Pamplona.

I’d like to thank all involved in organizing my visit to Pamplona including the ATANA and the City of Pamplona.