A few months ago I wrote about my first trip to Rio. One of the observations that had jumped out at me at the time was the repeated message from IT services firms: Lack of skilled labor was their biggest challenge. Forrester's Forrsights survey findings confirm: Education and skilled labor is the No. 1 constraint to technology implementation globally, particularly in emerging markets. In Brazil, 58% of respondents in our Forrsights Budgets and Priorities Tracker, Q4 2010 survey reported concern about insufficient skilled technical labor or relevant technical training as an obstacle to implementing IT solutions. That compares with only 16% reporting skills as an obstacle in the UK. 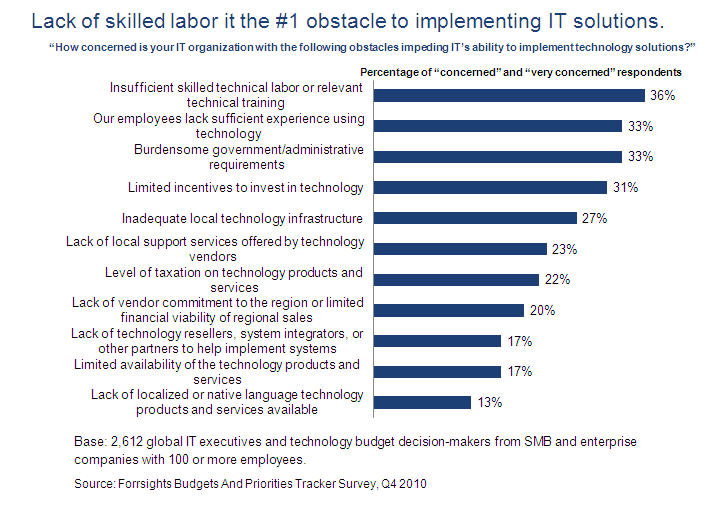 That message has been repeated to me several times since during trips to emerging markets. On my visit to Orange Business Services' (OBS's) Major Service Center (MSC) in Mauritius last month, the OBS team emphasized that they had selected Mauritius as a strategic location in part because of the availability of skilled labor. Mauritius, with an emphasis on information and communications technology (ICT) as the third pillar of its economy, has a goal of doubling its ICT labor force in three years. The government recently announced an ICT Academy with industry partnership to train 1.3 million young people and promote the software and business process outsourcing (BPO) industries in the country. ICT vendors and services providers such as OBS are participating in that initiative.

And this week I'm back in Rio where I, not surprisingly, heard the same message. I met with Orange Business Services here yesterday and learned that it had recently moved its local MSC from Rio to Petrópolis. Why? Because Petrópolis is the home of a major technology and science initiative, Petrópolis Tecnópolis, which grew out of redevelopment plans in the late 1980s and the launch of a computer science curriculum at the local Catholic University of Petrópolis. The city is also the home to the National Laboratory for Scientific Computing (LNCC), a research unit of the Ministry of Science, Technology and Innovation of the Brazilian federal government and has benefitted from investment as a technology hub. As a result, Petrópolis and the vendors based there enjoy a pool of skilled technical labor.

However, OBS's move is not merely opportunistic. OBS and other industry leaders have been actively involved in establishing and extending that technical curriculum particularly in the area of networking and telecom — in effect, helping to create a future potential employee pool. OBS also hires many students through an internship program open to students from their third year of studies — the point at which they have the skills to contribute at OBS.

The collaboration between education and industry has created a win-win situation for the city and schools, for the students, and for the technology partners. The new programs attract students, who acquired the skills needed to work for companies like OBS. The schools increase their numbers and improve their reputation as being able to prepare students for the job market: job placement is one of the most tracked indicators in higher education. And OBS estimates that it has reduced its training of these new hires by three to four months. Overtime, Petrópolis Tecnópolis has become known as one of the major technology centers of Brazil.

Another example of building its own labor pool is Cisco’s Networking Academy, which boasts more than 9,000 academies in 165 countries and provides ICT training to almost 1 million students each year. But that is likely the subject of another blog.

I’d love to hear other examples and stories.