Yeah, the tune is playing in my head. Video Killed the Radio Star. But in this case, it's Apple's iMessage service that's killing the SMS cash cow. For those of you haven't experienced it yet, check out this picture. 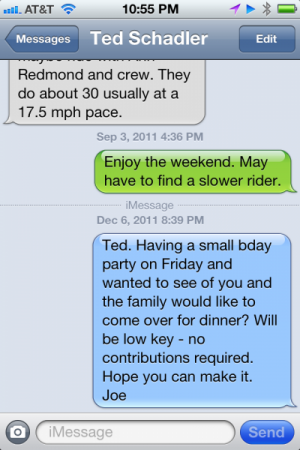 It's my riding buddy Joe sending me a text message, or in this case, an iMessage. The blue box is the giveaway — it came over Apple's texting service, not AT&T's SMS service. It's "free." That is, it travels over the Internet, not the SMS network, and it's free on Wi-Fi or included in my wireless data plan. And while I have unlimited texting, I do pay $30/month for the family plan, about $0.10/message last month. (I know, some of you text so much that it's probably a penny a message or less.)

Sending 50 messages a month to another iOS user. (iOS users move in packs.)

Each person pays for the SMS message, so that's 100 messages per person.

Said another way, that's $6B taken out of the SMS value chain by the iOS iMessage service every year. Then there's the BlackBerry Messenger service for inter-BlackBerry messages. And the Magic SMS app for iPhone and Android. And probably a hundred other SMS alternatives that I'll never know about. Add it all up, and 10 billion dollars in SMS value (not revenue) could be siphoned off to the wireless data market in 2013.

I'm guessing that the SMS services from the major carriers will start to feel the pricing pain if not the falling message-volume pain in 2012 and cause enough financial pain that it's cited in some carriers' 10-K filing by 2013. Am I wrong?