Last month George Colony, CEO of Forrester, talked about a “Social Thunderstorm” at the LeWeb conference in Paris. He argued that social is running out of hours and running out of people. What does that mean? Well, the second one is easy: The vast majority of consumers around the world who have access to a computer use social media. And the first one? George goes on to say that Americans are spending more time on social media than volunteering, praying, talking on the phone, emailing, or even exercising.

With so many people spending so much time on social media, it is crucial for companies to understand how their customers use social media. We just released our newest report, Social Media Adoption In 2011, which reveals the latest trends.

The report illustrates how consumers are using social media by applying our Social Technographics® global classification system. The graphic below illustrates this framework. We classify consumers into seven groups based on online activities, and consumers can fall into several different groups. Only Inactives are an exclusive group.

In the six years that Forrester has been collecting Social Technographics data, a lot has changed in the world of social media. Social networking has morphed into a global phenomenon. Today, 86% of online US adults and 79% of European online adults engage with social media. And consumers in emerging markets are also on social media — not just catching up. In fact, they lead the world in social media usage and engagement. 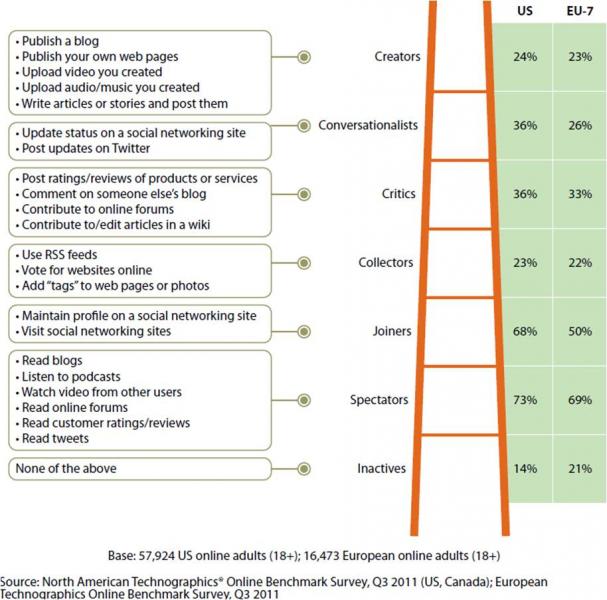 Comparing social behaviors in the US and Europe, we see that the majority of online Americans and Europeans are Spectators — meaning they consume social media content but do not necessarily create it. In fact, less than one-quarter of these consumers are Creators — the individuals who generate social content. We also found that while Americans and Europeans take a more passive approach to social media, this is different in emerging markets. For instance, more than two-thirds of online adults in metro China and India create social content. The message is clear: Companies can’t afford to take a “one-size-fits-all” approach with social media.

Clients can read Social Media Adoption In 2011 to understand how social media behaviors vary around the globe and what they should do about it. Forewarned is forearmed.