Have you noticed an increased presence of Apple products in public spaces and workspaces in the last few years? Turns out that 21% of information workers are using one or more Apple products for work. Almost half of enterprises (1000 employees or more) are issuing Macs to at least some employees – and they plan a 52% increase in the number of Macs they issue in 2012.

Sure iPhones and iPods are ubiquitous in public spaces, but Macs weren’t common, especially in the workplace. I started seeing lots of Macs in startups I visit such as Box and Evernote in Silicon Valley, and Backupify here in Cambridge, Massachusetts. But it got really interesting when I started seeing a few employees at large established tech vendors using Macs, where corporate IT usually doesn’t support them and seeing a disproportionate number of Macs among Starbucks loungers. The clincher was the behavior of CTOs at two large infrastructure software companies that have a group of CTOs that work across the company. In both cases, almost all of them were using Macs – and they were making fun of the remaining Windows holdout for using a “typewriter.” Of course, the iPad added to this phenomena, which is visible when you walk down the aisle of long haul flights in the US – there are lots of iPads, especially in first class.

So we decided to quantify the presence of Apple products in the workplace by asking over 3,300 IT decision makers in our annual Forrsights surveys what they were buying and supporting. But that won’t capture the growing phenomena of consumerization, where the employees use personally owned technology for work purposes, whether at home or at work. In fact, that’s what some of the CTOs were doing – bringing their personal gear to work and figuring out what they could do to make it work, often with little or no formal IT support. So we also asked 10,000 information workers about what products they use to get work done, at work and at home (we screened for people who use computers or a smart device an hour or more per day for work in our 17 country Forrsights Workforce survey).

Below are two portions of the graphics in our Apple Infiltrates The Enterprise report, released to clients today, and covered in a New York Times piece this morning. 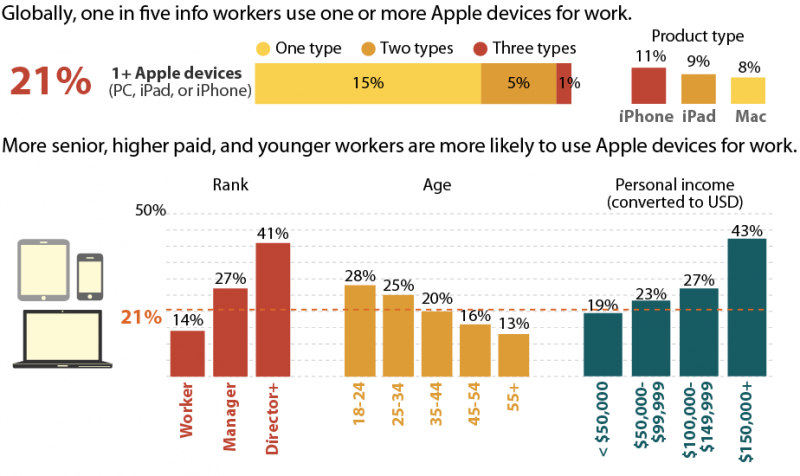 –          Managers and execs are more than twice as likely to use Apple products.

–          Younger info workers are twice as likely to use Apple products as older ones.

–          Higher income workers are more likely to use Apple products.

–           Info workers in countries outside North America and Europe are more likely to use Apple products for work.

Clients should note we have much more data than what we’ve shared in the report. These data are from large 15 minute online surveys that contain lots of data about all the devices that people use for work and personal tasks and lots more detail on what technologies IT is issuing.