In a recent report titled “Technology Management In The Age Of The Customer,” Forrester defines the Age of the Customer as: "A 20-year business cycle in which the most successful enterprises will reinvent themselves to systematically understand and serve increasingly powerful customers."  In this Age of the Customer, empowered consumers using social media can have tremendous influence.  Technology gives the lone voice a platform to be heard across the Internet. Technology is the force multiplier for empowered consumers.

Jason Huntley, a UK-based IT consultant, is a perfect example of one of these increasingly powerful customers. He posted a blog titled “LG Smart TVs logging USB filenames and viewing info to LG servers.” In it Jason detailed how his Smart LG TV was spying on him.  The TV was not only reporting data about viewing habits, but was also uploading the filenames from the storage devices he attached to the TV.  His viewing habits data was collected despite the fact that he had opted out of the “Collection of watching info.”  Jason wrote, “This information appears to be sent back unencrypted and in the clear to LG every time you change channel, even if you have gone to the trouble of changing the setting above to switch collection of viewing information off.”  He had a false expectation of privacy. See below:

To make matters worse, when Jason inquired about his findings, he was told that he accepted the Terms and Conditions on his TV and to direct his concerns to the retailer he purchased the television from.  The media quickly picked up on the blog, widely reported the story, and LG subsequently launched an investigation.  There was speculation that LG could have broken the law. In a statement released on Thursday, LG verified that Smart TV was collecting viewing information despite customers opting out, and would be releasing a firmware update to remedy the problem. 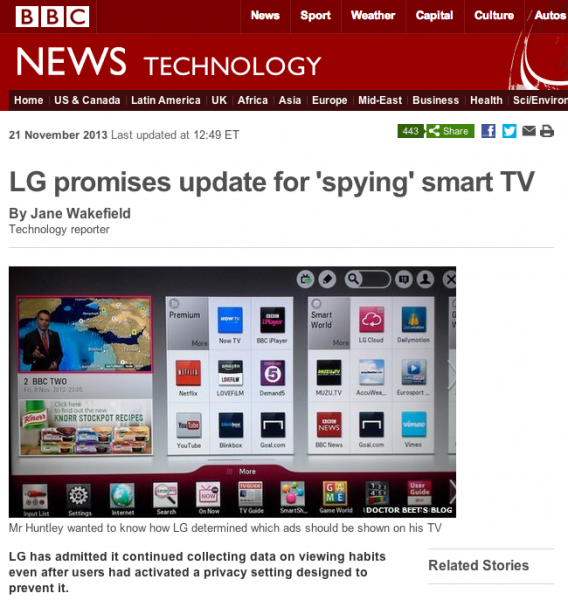 In the post-Snowden era, privacy has been elevated to a broader audience, and companies that mishandle consumer information could disrupt their own businesses, driving empowered customers away to competitors. Now I am not suggesting that all consumers are concerned about privacy. As I write this blog I am logged into Gmail, where I know I am the product.  In fact, I fully expect to see Gmail inbox ads referencing Smart TVs very soon.  What I am suggesting is that if you set customers' privacy expectations in one direction and then do the opposite, you are putting your business at risk. It is ironic that LG collects personal information (of course they don’t call it personal information, but I disagree) despite their customers’ wishes.  On LG’s home page, the company espouses their “resolve to establish a lasting relationship with, and to achieve the highest satisfaction for our customers." Their actions demonstrate the opposite.

Smart TVs are just one of example of Internet of Things (IoTs) devices.  As more and more devices become IP-enabled, companies are very eager to collect data from them.  Firms want to turn this data into value. As is the case with LG, this IoTs data is used for advertising, but other possibilities are limited only by a company’s analytic skills and technology. How companies decide to balance customer privacy with this wealth of IoTs data is critical. Being forthright about the collection, use, and protection of customer data will be a differentiator.  In the Age of the Customer, it is much easier to lose a customer than to retain one.