[This is an update from a June 2013 post. Also see the new book I wrote with Julie Ask and Josh Bernoff, The Mobile Mind Shift.]

The techologist in me (still) loves getting the monthly Web server report from Netcraft.com. Astounding statistics like the number of registered public Web sites (998 million in August, up from 23,000 in 1995) and active Web sites (179 million) put into the context of history shows simply and directly just how deeply the Internet has penetrated our lives over the last 19 years.

You can no longer avoid it: There's a relatively new open source Web server called nginx (pronounced engine-x) that you must care about (see the figure below, complements of Netcraft). Nginx is marching up the market share of the busiest million Web sites (those most fueled by mobile apps and sites) to take a clear #2 position behind the ebbing Web stalwart, Apache. Of the top million busiest Web sites around the world, nginx now has 197 thousand while Apache has 514 thousand and Microsoft has 124 thousand.

Mobile is of course the power driver of traffic on these busiest sites. How could it not be with more than a billion people wielding smartphones and something like a quarter billion lounging, studying, and buying on tablets? 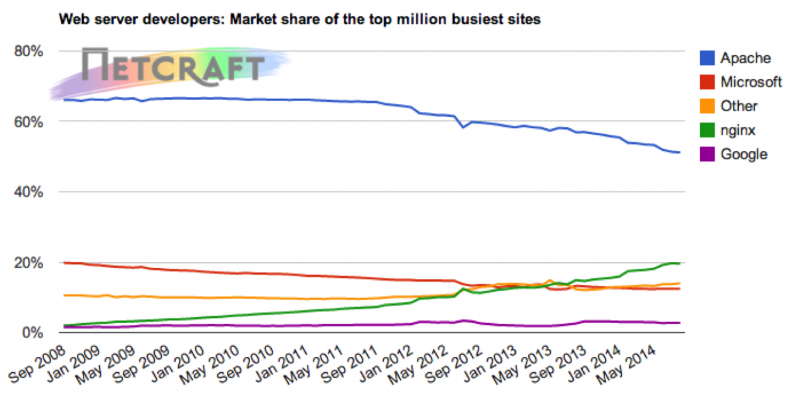 When I ask my mobile app development colleagues Michael Facemire and Jeffrey Hammond why nginx is growing, they tell me that nginx is particularly good at handling mobile app scenarios. It's because mobile apps or mobile Web sites ping the HTTP server in a very different way than a typical Web site does. Mobile apps and mobile sites use REST APIs, which means every ping from the app has to re-establish the "connection" to the server (it's a stateless connection). Also, the volume of pings and the number of simultaenous users is often an order of magnitude higher than for most Web sites. So mobile apps need a Web (aka, HTTP) server that can handle millions of simultaneous connections and deliver small amounts of data with a 100 millisecond response time.

And that's precisely what nginx is good at. It can handle REST API calls much better than a traditional Apache or Windows Web server. Nginx is an HTTP server for the mobile era.

Here's why application development and delivery professionals should care:

That's why you should care. Nginx is a symbol of a massive pivot in your techology platform from three-tier Web to four-tier engagement. Growth in nginx signals the radical overhaul of the architecture you need to win in the mobile moment. It's time for us all to get smart about that.

We call this new four-tier architecture an "engagement platform." The four tiers are service, aggregation, delivery, and client. It's the runtime foundation of the new business technology agenda that will define winners and losers over the coming decade. In the world where competition is defined by winning in the mobile moments of your customers, you need an architecture to efficiently handle: