Smart cities are a myth.  But cities are now finally ready to invest in new technology.  No, I don’t find those two sentences contradictory. Yes, I do finally feel like the hype of smart cities is fading.  And, yes, I do think the promise still holds much potential for cities. But boy have I tired of hearing smart, smart, smart, smart, smart (somehow 5 times sounded right to me, or should I say sounded “smart”). 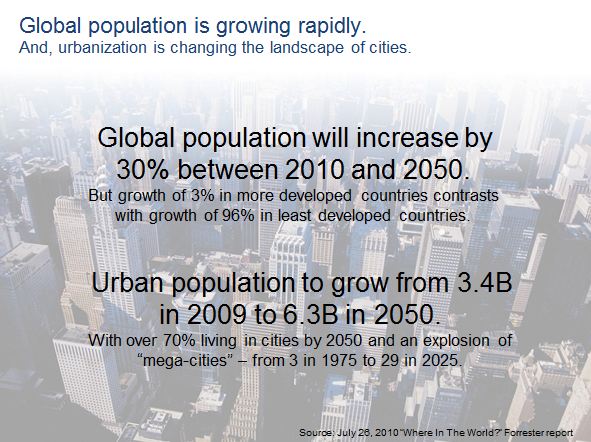 Back in 2010 I wrote a lengthy report on the smart city opportunity for vendors. At the time my research was focused on vendors, and as the vendors were all worked up about smart cities it made sense to put some structure around the opportunity.  What were the primary market drivers?  What issues were cities currently facing or expecting to face in the future?  Anyone who has attended a talk on smart cities knows the drill ad naseam:  population explosion, urbanization, startling impact on city services (transportation, waste and water management, public safety, health, education etc.)  And, I’m just as guilty.  The slide at the right was from my first webinar on smart cities in 2010.

But from there the discussions often focused on the technology: sensor-activated video surveillance and video analytics, sensor-activated heating and lighting and smart meters for municipal buildings, automation and self-service for city services, electronic noses and capacity sensors for waste management.  Yes, I did write about electronic noses and have often found a way to weave them into presentations and reports.  But even back in 2010, I also argued that it would take time and creativity, particularly in the business models around technology investments.  And, subsequent blogs and reports highlighted the need to build out a better foundation before investing in some of the bright shiny “smart” solutions.   My September 2011 distinguished between “street smart” and “book smart” and argued that cities needed to go back to the books, focusing on rationalization of back office apps and streamlining of government services.  City leaders needed to focus on improving governance, embracing new systems of civic engagement, and adopting more shared services not only for efficiency but for better outcomes.  In short, cities needed to build a better foundation on which to become smart.  And, now five years later, and ½ way through the “Decade of Smart,” cities have done just that. 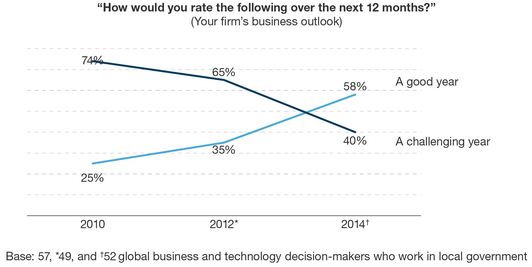 Having written about how cities weren’t ready for so long, I wanted to do a mid-term review.   In taking a step back to evaluate I came to the conclusion that we were not seeing a mid-life (or mid-decade) crisis. We were in fact truly seeing a coming of age.  As I outline in my report, “Cities Reach A Coming Of Age Not A Midlife Crisis,” city leaders now embrace a more citizen centric approach, they have aligned technology and the business, and they truly see their prospects looking up: this is the year that more decision-makers in government anticipate a “good year” than a “challenging year.” Times have changed.  (See figure on the right.)

Despite the remaining challenges (and yes, there are some), cities are now in a better position to invest in and adopt new smart city solutions. The key to their transformation lies in establishing the foundation before building on it. New solutions must be part of the cohesive whole — from bottom to top. Smart cities have been characterized as a system of systems — the operational domains of the city such as transportation, public safety, utilities, administration, etc. Here at Forrester we see systems differently. The building-block systems that must be in place are those that cross these operational areas. Forrester defines four systems that an organization must embrace and evolve: 1) systems of record; 2) systems of engagement; 3) systems of automation; and 4) systems of insight.

However, it is not enough to have each of these systems. Rather, organizations must assemble these building blocks into a cohesive whole. Therein lies the challenge. None of these is a monolithic, standalone system. As cities embrace digital transformation, these systems (if they exist) must evolve to form a more open, integrated business technology foundation.  (See figure on the left.)

What’s the call to action here?  For those who haven’t embarked on the smart city journey, don’t be afraid. Just make sure you’re building on a solid foundation.  For those who have started down the path, it’s not too late to review and shore up the foundation if necessary.  And, most of all, think broadly about the resources available to you.  My first report on smart cities argued that cities needed to get clever about new business models.  In the current report, I extend that advice: build systems of enablement by collaborating with other jurisdictions, identifying public-private partnerships, enabling civic developers, and uncovering new funding sources.  Systems of enablement leverage government as a platform, and make innovations more sustainable in the long-run.