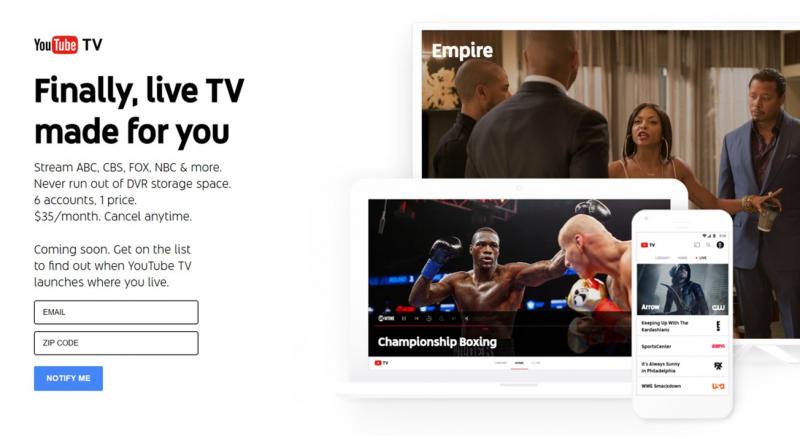 Watch out, cable TV. Today YouTube shared it's newest subscription service — YouTube TV — with a hundred or so journalists at a live event at the company's headquarters. This is different from YouTube Red, the subscription version of YouTube enjoyed by at least 1.5 million people and focuses mostly on ad-free access to short-form videos along with a few exclusives. Instead, this new service is aimed squarely at pay TV. It does so by offering three things that cable TV has previously been best at:

There's a lot more to say about the details — like how it will only be available in certain cities where local TV content will be available or how it will be priced much higher than a Netflix subscription — but that's not really what's motivating me to write about it. I'm writing about it because this signals a massive change in the industry. For the first time, the broadcasters are letting a powerful digital platform have the keys to its treasure room: live, first-run TV shows. Digital platform, for those new to the term, refers to just five companies who have earned the title: Amazon, Apple, Facebook, Google, and Microsoft. All five of these companies have tried to cozy up to TV for many years now, and all of them have been rebuffed (I described this platform TV grab back in 2012).

I've covered YouTube since it was invented, before Google bought it. From the earliest days, I have argued that YouTube needed to take two steps to grow beyond the user-generated video site YouTube was founded to be. First, the company had to use machine intelligence to figure out how to custom create playlists targeted to each individual viewer. Just this week YouTube announced it had achieved a billion streaming hours a day, jumping ahead of analyst estimates for when that would occur. The main way they accomplished this? By using machines to intelligently place the videos in front of you that you want to watch next, driving up minutes of viewing significantly. Check.

The second thing I urged from 2008 on was getting a hold of first-run TV content (live TV wasn't really an option back then for technological reasons, but I argued it should get as close to that as possible). Even as I recommended it, I knew it wasn't going to happen. Because no TV network in their right mind would sign a distribution deal with YouTube (and its parent Google), a fast-rising disruptive competitor. In fact, early on, several networks combined to create Hulu, precisely to head YouTube off at the pass. When Hulu hit some trouble later and was put on the selling block, YouTube offered to pay twice what anybody else did and the networks suddenly decided they didn't want to sell Hulu. All to keep YouTube (as a proxy for Google) out of the TV business.

By partnering with YouTube now, TV networks are showing that they think they have a sense of where the world is going but also where they can play a unique role. For one, they will make sure YouTube and other OTT TV providers have to charge nearly as much as cable but for a smaller package, reducing the impulse to completely dump cable. In other words, this is a solution for someone who already doesn't want cable, what we have called cord-nevers in our research. Rather than a substitute for cable, this is part of a solution a younger viewer might build that includes YouTube TV, Netflix, and Amazon Prime or Hulu Plus. All of it adds up to roughly a cable bill and all of it drives revenue back to the TV programmers, even if it's not the juicy guarantees that cable TV used to deliver.

More importantly, this shows that programmers have done enough testing of OTT TV with smaller players like Sling and Playstation and now they are ready to let the big digital platforms run with the TV opportunity. Is this product going to change the world? No. It reflects that the world has already changed. TV networks and cable programmers are embracing digital distribution, albeit carefully and after taking some beatings. OTT TV will be commonplace soon and broadband providers are gearing up by shifting to digital home and other value-added services. Most of all, the digital platforms are indeed taking over the world, this time with permission from their former adversaries.

James McQuivey, Ph.D., is a vice president and principal analyst at Forrester. He is also the author of the book Digital Disruption.

Laura Koetzle September 6, 2022
As war, inflation, and fuel shortage fears cloud the near-term picture for businesses, being shrewd with investments and initiatives will be key.
Read More