As the saying goes, if we waste now, we might want it later and regret the waste. Well, it’s even worse than that in the global food system. We waste now, and we want it at the same time. One of the paradoxes around food is that we have both too much and too little at the same time — and not just in different countries or parts of the world.

Within the US alone, there is both food insecurity and food waste. According to the US Department of Agriculture (USDA), 40 million people lived in food-insecure households in 2017, including 6.5 million children.* At the same time, food waste in the US is estimated by the USDA at between 30–40 percent of the food supply. This estimate corresponded to approximately 133 billion pounds and $161 billion worth of food in 2010. More recent articles cite roughly the same figures.

Food waste globally is of epidemic proportions. According to the UN Food and Agricultural Organization, roughly one-third of the food produced in the world for human consumption every year — approximately 1.3 billion tons — gets lost or wasted. Food losses and waste amounts to roughly US$680 billion in industrialized countries and US$310 billion in developing countries. That’s a lot of waste; we know it and are talking about it.

In a recent blog, What’s News In Food Tech? Data Tools Help Separate The Wheat From The Chaff, I teamed up with the folks at Quid to explore key themes in food tech. Quid’s tool analyzes unstructured data, like the news, to identify key words and themes. Through that analysis, we discovered that “food waste” was one of the most prevalent food-related topics in the news. In the UK and Canada, discussions of food waste make up almost two-thirds of media coverage about the food system and over half in Australia and Singapore. Oddly, the topic is much less prevalent in the US news. 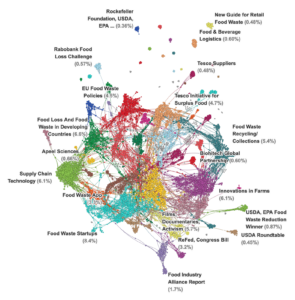 To dig into those findings and get a better understanding of which food waste issues and initiatives were being discussed, we reached out again to Quid. We ran a search for news articles referencing food waste innovation, solutions, and technologies. The initial mapping of the resulting articles over the last five years (to the right) is a little difficult to understand. A few topics pop out, such as articles discussing food waste startups (8.4%), research on food loss in developing countries (6.6%), legislation like the EU’s food waste policies (4.5%), and company initiatives such as the Tesco initiative for surplus food (4.7%). We’ll explore all of these in more detail. 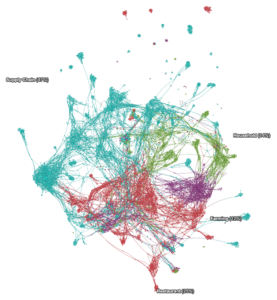 But a particularly interesting revelation appears when the articles are categorized along the food value chain: farming, supply chain, restaurants, and households. See the network map to the left. There you can see that the supply chain (in blue) accounts for almost half of the overall narrative in the news. Another 25% of the news articles (in red) discuss waste in restaurants, 14% in households (green), and 12% in farming (purple). Concern about the journey from farm to store and in the store is top of mind, even more so in Africa, where over 70% of articles related to supply chain waste. See the bar chart below. 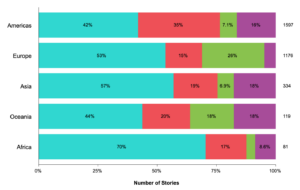 Our food tech research will explore the ways in which new technologies and new business models enabled by these technologies can help to address food waste across the value chain. Some of these solutions include tools to help farmers better understand when to harvest and how to get products to market; to help stores optimize shelf life and distribute food before expiration; and to enable households to purchase only what they need.

* Food-insecure means that at times during the year, these households were uncertain of having, or unable to acquire, enough food to meet the needs of all their members because they had insufficient money or other resources for food.

Sandy Carielli 18 hours ago
At first glance, the web application firewall (WAF) market — populated by long time vendors with robust partner programs, extensive supporting services, and a slew of customer engagement opportunities — may seem like a space that has topped out. However, changes in how organizations develop and deploy applications — more hybrid cloud, more APIs, more […]
Read More