Skip to content
< Blogs
Home > Featured Blogs > Hispanics’ Use Of Social Media – Is It The New Mainstream?

It’s been almost 18 months since I wrote Hispanic Social Technographics Revealed, which highlighted this consumer segment’s very strong inroads using social media of all types. And in that time, the volume around how, why, and when companies should use social media has grown even louder. Likewise, Hispanics' engagement in social media has grown.

I’ve now published an updated report that compares year-over-year data and entitled Social Media Is Mainstream For Online Hispanics. This view shows that the gap between Hispanics' and non-Hispanics' placement on the Social Technographics ladder has narrowed, especially in the more popular groups such as Spectators and Joiners. However, Hispanics still significantly lead the way when it comes to higher-order activities such as those of Creators, Critics or Collectors. 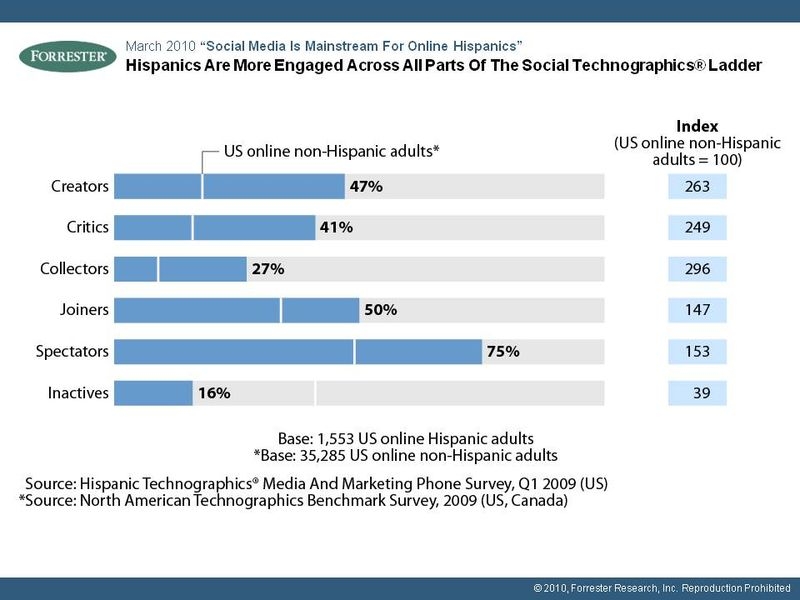 This year, we also took a new look at social activities by language preference online. Our data has previously shown that both Spanish- and English-preferring Hispanic consumers had very similar Social Technographics profiles, but the new year-over-year look reveals that Spanish-preferring consumers are contributing to the overall growth of Hispanic social media usage. For example, Creators in this group grew by nine percentage points and now outpace their English-preferring counterparts.

I hope you find this new report useful in shedding yet more light on how Hispanic consumers are using the Internet, and the importance of continued research to track the changes in this evolving market. If your ongoing focus is specifically on Hispanic consumer research, then I would also recommend having a look at some other earlier blog entries on Qualitative Research for Hispanic Marketing as well as Four Tips For Building A Hispanic Strategy.

As always, I welcome any reactions or comments to the findings or recommendations in the report. Happy reading.

Stephanie Liu 3 days ago
In the era of data deprecation, many B2C marketing clients are asking me “How can I get more first-party data?” or “How do I get more customers to share data with me?” It’s a valid question and a totally understandable one. A common recommendation (including from Forrester) to contend with the loss of third-party cookies, […]
Read More
Blog