Skip to content
< Blogs
Home > Featured Blogs > 30 Hours In Saudi Arabia: How “Smart” Is That?

Here I sit finally getting a chance to reflect on my 30 hours in Saudi Arabia. Yes, just a little more than one day. But one day was enough to change any preconception that I might have had, and spark my interest to learn more. My “day” started with the VIP treatment through passport control – which I must say was much appreciated.  The airport in Riyadh is certainly not Dubai International – far from it. But if there were any disappointment at the inauspicious first impression, it stopped there. Although to set the stage, I was invited to Saudi Arabia by IBM to participate in an analyst event showcasing “Smarter Cities” initiatives in the Kingdom. So admittedly, I was only presented the “smart” side of Riyadh. I am eager to see more.

The Analyst Day began with a field trip to King Abdulaziz City of Science and Technology (KACST), which is not really a “city” at all. Rather KACST is both the Saudi Arabian national science agency and its national laboratories. The science agency is responsible for science and technology policy making, data collection, funding of external research, and services such as the patent office. While it wasn’t a “city” itself, many of the projects contribute to the goal of becoming “smart.” We visited the nanotechnology labs where we learned about water purification using local limestone and sandstone for ceramic water filters. While ceramic membranes in filters are common, the use of local materials is new, allowing for greater self-sufficiency and sustainability.  The discussion continued on to the use of palladium nanoparticles . . . Interesting but a little bit too “smart” for me.

However, what I found fascinating was a discussion later with Abdullah Taha, the ICT Investment Development Director of SAGIA, the Saudi Arabian General Investment Authority. Growth of the IT industry and penetration and use of ICT are major initiatives in the Kingdom. Saudi Arabia’s population is projected to increase from 25.7 million in 2009 to 43.7 million in 2050 – or an increase of about 70% – with currently a huge young population of 40% under 15 years old, and another 18% between 15-24 years old. To accommodate this young and growing population, the government has initiated a project to develop four “economic cities.” In the 1970s, Saudi Arabia developed two new industrial cities – Jubail and Yanbu – with aspirations of “bigger, better” according to IBM’s GM for the region, Takreem El Tohamy. But, this time, the objectives are different, and take into consideration economic diversification and sustainability. This time around the cities are not just “economic”, they are Saudi Arabia’s new “smart cities” and part of its 10 x 10 strategy to be in the top 10 most competitive, pro-business countries by 2010. I’m not sure whose measure they plan to use but by one, the World Bank’s Doing Business Index, they are not far off. In four years, Saudi Arabia has risen from 67th to 13th position in the World Bank’s Doing Business Index 2010.

These four “smart cities” include: 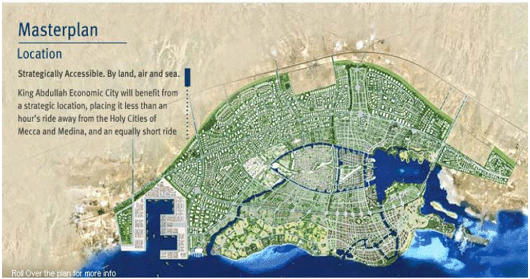 These “cities” were established as independent companies. They are open to investors, with the KEC “IPO” planned for this month.  JEC and KAEC have already IPO’d. While the business model is interesting I was also interested in standardization of technologies and coordination of services. The end result will not be very efficient if each city adopts different technologies for their services and integration among them is difficult or impossible, particularly across services like health, education and public safety. Apparently there will be a higher-level entity to manage basic services. But, much of that is still TBD. While two of the cities are “up and running" the overall plan is still in the design phase. These greenfield cities, while “smart” on paper, are still in training – like the child genius: smart but you don’t quite know how to manage him.

Which brings me to managed services, as I follow my stream of consciousness. Who will provide the services? Will these cities host and manage their own city services? This is a question I’m exploring in my ongoing research on smart cities. What is the role of external services providers, either MSPs or the local telecom operators? IBM itself sees opportunity in "build, operate and transfer" contracts to get these cities “up and running.” But who will they transfer to? What is the best and most sustainable long-term model for delivery of smart city services? I like the idea of "smart cities." But we are still designing the curriculum to make them smart.

In answer to my initial question about how smart 30 hours in Saudi Arabia is, I offer a resounding "very." Definitely worth the long flight from San Francisco.