Last week, Forrester released results from our “Global IT Budgets, Priorities, And Emerging Technology Tracking Survey.” Highlights of the survey are reported in Chris Mines’ recent blog, the title of which gives you the gist of our findings: The Overall IT Budget Environment Has Turned Positive. 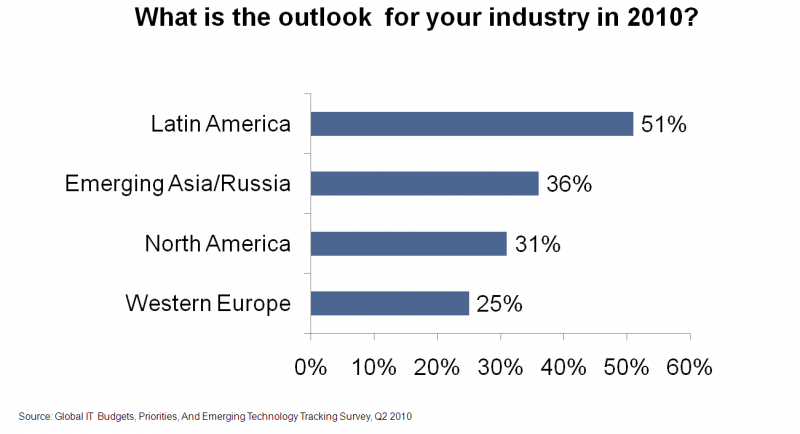 However, there were some very interesting differences across some of the geographies we surveyed.  Respondents in emerging markets tend to be more optimistic than their counterparts in more mature markets. When asked about the outlook for their industry, 51% of respondents in Latin America thought that 2010 would be a very good or somewhat good year, followed by 36% in Emerging Asia (China and India) and Russia, with North America and Western Europe lagging behind with only 31% and 25%, respectively. Big difference in outlook between Western Europe and Latin America! On a more positive note all around, these numbers were much more positive than the outlook of respondents in last year’s survey.  In 2009, only 8% of respondents in NA and WE expected a good year – really not very optimistic about their industry outlooks. Emerging Asia (without Russia) was 15%, and Latin America was 21%.

Perhaps more importantly, at least for our tech vendor clients, were the expectations with regard to total IT spending. Optimism about their industry translates (or results from) expected increases in their IT budgets. IT decision-makers feel good if they’ve got money to spend…. Doesn’t everyone? 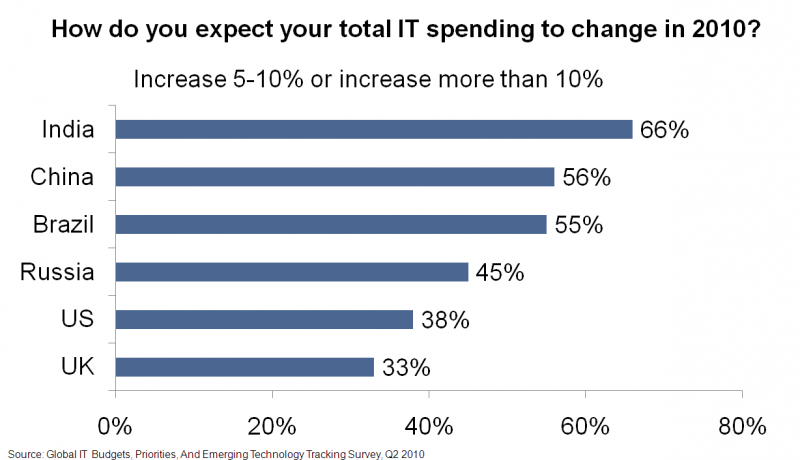 As Chris noted in his blog, a little more than 40% of the 2,800 IT decision makers surveyed expect to increase their organization’s overall IT spending in 2010, up from just 12% in 2009.  A quick look across countries, however, shows that expectations differ. India led the pack, with a whopping 66% expecting to increase IT spending, compared with 56% in China and 45% in Russia, and contrasting with only 38% in the US. Across the board, these expectations are more positive than in 2009. Last year only 23% in China and 21% in India expected their organization’s overall IT spending to increase. These were in fact the more positive responses in 2009, with the US lagging at only 11% and Russia with only 6% expecting increased spending. These results illustrate the opportunity for tech vendors in emerging markets. Now the challenge is how to exploit it.

What have you seen in emerging markets this year? Increased optimism and an IT spending upturn, as we have, I hope.