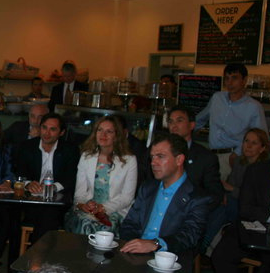 nt Dmitry Medvedev toured Silicon Valley last week, meeting with tech vendor executives and local entrepreneurs.  At Cisco, Medvedev participated in a telepresence session and used a Flip video camera for the first time. He met with representatives of public organizations and academic and business circles at Stanford University.  And, more informally, AmBAR, the American Business Association of Russian-Speaking Professionals, hosted a session in a café in Palo Alto with local students and entrepreneurs.  In each setting, the Russian president hoped to gain an understanding of what makes the Silicon Valley tick and glean some of the best practices developed in the region to take home and apply to his new Skolkovo initiative.  He has been talking about diversifying the economy for some time.  But with this initiative he has plans to develop a Russian “Silicon Valley” just outside of Moscow.  This new “inno-grad” (from “innovation” and the Russian word for city – think Leningrad) will promote Medvedev’s new modernization directions, including advancements in IT, telecommunications, and also biomedical and nuclear technologies. He aims to attract local and foreign high-tech companies with infrastructure, tax incentives, and other government support.

Cisco for one is excited about the opportunities in Russia. During Medvedev’s visit, Cisco announced a $1 billion investment in Russia to promote innovation and technological transformation.  Cisco’s commitment includes five simultaneous initiatives:

Cisco sees big opportunity.  As Glen Cox, VP Cisco Services, put it, we “can’t even see the sides of the opportunity.”  They’re thinking about the 20,000 branches of Sberbank, the state savings bank, and the 86,000 kilometers of the Russian Railway – desperately in need of modernization.  But, that’s not the only front on which Russia needs to transform.  Fortunately, Cisco has also recently formed a council to study the opportunity and devise a more detailed strategy – one that will certainly also be mindful of the realities of doing business in Russia.

Russia needs to do a lot more than build an innovation city in order to transform its economy.  Obstacles are institutional and structural.  Corruption is endemic.  And, for many Russians, fatalism is a way of life.

Sure, Russia needs to diversify in order to be less susceptible to the rise and fall of oil prices – which it certainly benefitted from in the early years of Putin’s regime.  But, in order to truly create an environment that fosters innovation and empowers the average Russian to buy the products of that innovation – that is, addressing both supply and demand – the government needs to address a few harsh realities:

With this track record, Russia needs more than a technology park to promote economic diversity and encourage investment and entrepreneurship. For starters, Russia needs to create demand for technology, not just supply.  To do this, Russia needs to promote business, not just innovation.  Only a business-friendly environment will create the demand for technology – both from successful SMBs and enterprises, but also from the middle class that they create.  For this to happen, Russian needs serious institutional and societal reform.  Not just a new city.  Russia has a history of company towns, of academic villages and of unsuccessful reforms.  Let’s hope with Cisco’s stake in the game they can help encourage a truly broader country transformation.

A Russian saying that President Medvedev evoked in his speech at Stanford University last week asserts that “it is better to see something once than to hear about it a hundred times.”  Let’s hope not to only hear about changes in Russia.