I will be joining Forrester's Tweet Jam on Cloud Computing today to add some commentary on the differences we're seeing in attitudes toward "cloud" as a delivery model and in adoption across countries.  Interest and adoption differs significantly across countries.  While in most countries the primary drivers of both Infrastructure-as-a-Service (IaaS) and Software-as-a-Service (SaaS) are around speed and flexibility, in others the primary drivers are cost.  Interestingly, in India and Russia, the No. 1 driver for IaaS is "improving disaster recovery and business continuity." IT decision-makers in those markets prefer to rely on those focused on delivering infrastructure than on their own datacenter, for certain projects.

As for inhibitors, the main concerns are pretty common across countries: security and privacy issues, integration with existing infrastructure and applications, and uncertainty around to total cost of ownership.  Wh 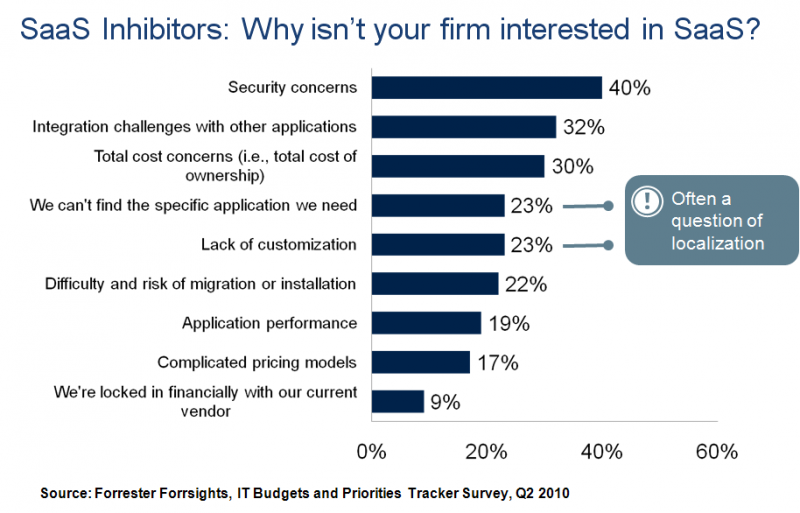 ile many are driven by the desire to move from fixed cost to rotating costs (capex to opex), they remain concerned about the total costs in the long-run.

Another inhibitor to SaaS adoption that we've found to be common in markets such as China and Brazil is the inability "to find the application we need." In the case of China, 64% of IT decision-makers in Forrester's Forrsights Budgets And Priorities Tracker Survey Q2 reported they had a general IT strategy to prefer SaaS over on-premise deployments. Yet 40% reported that they could not adopt because they couldn't find the app they needed.  This suggests that IT departments are open (and even prefer) SaaS as the delivery model, but they are not finding the applications localized to their specific market — either to the local language or local tax laws and regulations or even simple differences like date/time conventions.  These findings indicate the need to differentiate sales and marketing strategies across geographical sales units, and to localize product offerings in order to meet the needs of specific markets.

I look forward to "hearing" the observations of others during the Tweet Jam on Cloud, and in discussing these issues further in comments here or via inquiry.