Oracle’s keynotes and salesforce.com’s presentation next door have never been more confusing and contradictory for large users than they were today. Larry Ellison gave the 41,000 attendants of this year’s OpenWorld a cloud computing 101 session prior to the launch of the new EXALOGIC appliance, a machine engineered to run the Oracle Fusion Middleware stack very efficiently. After he rejected talking about the cloud for years, he swung over to the opposite end of the spectrum. Even though EXALOGIC is mainly aimed, in its first version, at private data centers, Larry simply renamed the virtualized data centers as private clouds and promised customers that they will get an elastic cloud with the help of the EXALOGIC box.

On the other side, salesforce.com’s Marc Benioff called every server on premise the “false cloud,” basically implying that something like a private cloud is simply a stupidity in itself.

Who is right or wrong in this debate? Is Larry simply doing cloud-washing at its best, or is Marc running a “false marketing” campaign, calling everything except his own cloud the “false cloud”?

Let’s understand how Forrester believes a private cloud differentiates itself from a traditional but modern and virtualized data center: 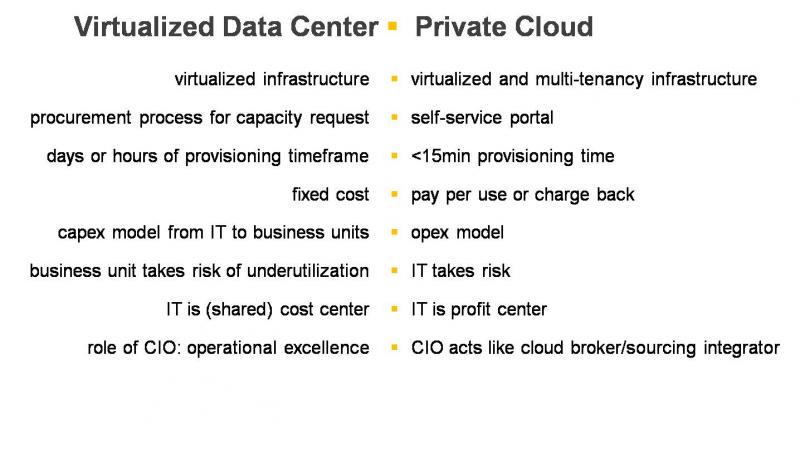 You see that the virtualization technology is a continuous evolution, but the big disruption from the virtualized data center into a private cloud is the business model.  If the CIO fundamentally changes the way he or she runs IT and starts offering a pure OPEX model to the business units, we should talk about a cloud. In most cases, this is provided out of private cloud resources combined with public cloud resources in a hybrid approach. Obviously, the CIO needs to run a profit center to be able to take the risk of fluctuating utilization, potentially reselling public resources instead of the company's own resources dynamically. By far, most CIOs are not ready for a private cloud – although some are!

Coming back to Larry and Marc: I believe Oracle’s new EXALOGIC is an excellent machine to consolidate workloads and offer the scalability required for a private cloud. The Enterprise Manager and Oracle’s new Assembly Builder definitely help to achieve the level of industrialization CIOs need to compete with public provider offerings. But, at the end of the day, EXALOGIC is simply a machine with well-tailored software on it. It’s up to the CIO to engage in a cloud business model or to simply run a high-performance data center. In this respect, Oracle and its partners need to carefully explain usage scenarios instead of rolling out a cloud-washing campaign.

Finally, Marc should appreciate that there are other large-scale data centers on this planet – some are operated by hosting providers and outsourcing firms – some are very successfully run by very large global corporations – some are of the size of your data centers. Marc, with all respect, the more you talk about the "false cloud," the less these very large firms will continue to appreciate your strategy.

Please leave a comment to let us know if you believe in a private cloud and how you are building it.