Ever heard of social co-creation contests?  These are online contests sponsored by a company (and often hosted by a vendor) whereby a question or problem is posed to an audience, with an prize given as an incentive for participation. A simple example: a company wants a new logo, and offers $500 for the best design that conveys the company's image. The host vendor publishes the contest, and its cultivated audience of design artists contribute ideas. The company may pay the same amount of money for the logo design, but the contest generated many ideas from which to choose.

Starbucks cares about its environmental impact, and works hard to be "green." One area of ongoing concern for the company is the amount of waste generated from disposable cups — a concern shared by partners at the betacup, who had been raising awareness of this problem since May 2009. Shaun Abrahamson (from Mutopo) and others from the betacup approached Starbucks with the idea of sponsoring a co-creation contest. Starbucks put up the $20,000 prize money, and betacup partner jovoto (a social co-creation contest vendor) launched the contest to its cultivated audience of creatives (although anyone was able to access the site and participate in the contest).  The contest ran this summer, and the winners were announced in July.  (Clients, click here for a complete case study.)

I actually heard about this contest back in the late spring.  "Cool idea," I thought. "Too bad I'm not a chemist or a physicist who can develop a new material with which to make coffee cups." But that wasn't the only goal of the project. In fact, as clearly spelled out in the contest brief, participants were encouraged to "[t]hink beyond just the vessel for carrying coffee, and develop a way to cause behavior change at a massive scale." The actual winning entry did precisely that.  Dubbed "The Karma Cup," its idea was simple. At the register of each Starbucks store will sit a small chalkboard. Each time a person brings in a reusable cup for their beverage, a box is checked off — and every 10th beverage is free. 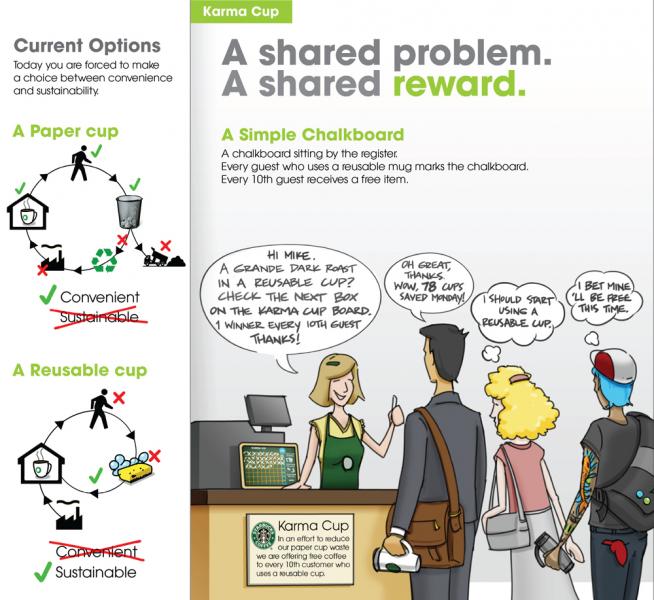 The idea is simple, elegant, and brilliant. It encourages use of reusable vessels, creates a common bond amongst customers bringing in those vessels, and gives customers a one-in-ten chance of getting their caffeine fix for free. For Starbucks, it loses a bit of revenue, but encourages green behavior from its customers, putting it a bit closer to its goal of having 100% reusable or recyclable cups in place by 2015.

Starbucks is still considering the Karma Cup solution internally, and it may well be considering some of the other 429 ideas contributed by the community. But one thing is clear: its effort shows that product strategy issues big and small can be addressed via co-creation.

Christina Schmitt 8 hours ago
Technology is not the exclusive core expertise of IT anymore. For many years, technology has had a place in the B2B marketing strategy and represents a big part of marketing’s responsibility. In addition to implementing and running the relevant marketing technology, marketing requires the knowledge to use it effectively to drive the revenue engine, create […]
Read More
Blog

Lily Varon 10 hours ago
82% of software-decision makers at US retail companies are planning to adopt or are adopting payments software in 2022, per Forrester's data.
Read More