Today Facebook announced three mobile enhancements for Facebook Places, including new functionality that developers of mobile applications may incorporate into their products and a powerful new (and free) platform for connecting mobile consumers with relevant ads for nearby businesses.  Today's pronouncements demonstrate the ambition and vision Facebook has for itself in mobile computing and socializing over the long term, but in the immediate future Facebook now is poised to bring the wonders of checking in to the masses.

Chances are, you are NOT reporting your location (aka "checking in") to your friends and followers in social networks.  According to Forrester data from earlier this year, just 4% of US online adults have ever used location-based social networks on their mobile phones.  Simply put, there hasn't been enough WIIFM ("What's In It For Me") to entice and retain the typical consumer.  Now, Facebook is set to change that, lowering the bar and improving the WIIFM for a wider range of consumers. Average Facebook users who previously felt "checking in" was better suited for narcissists and techies can now realize benefits from location-based services (LBSes, also known as geolocation) via a larger and richer set of offers and deals.

Facebook's new Deals feature is uniquely positioned to bring rapid changes to consumer behavior over the next year.  Here's why:  First, Facebook is a platform with 500 million avid users (compared to the 4 million who currently use Foursquare), and with each passing month more consumers are accessing and updating Facebook via their smartphones.  Second, Facebook's new Deal platform is free for marketers and SMBs; anyone who claims a location on the Facebook Places platform can easily and quickly launch an offer.  Finally, marketers are lining up to create offers on this new Facebook platform. In the coming weeks, watch for deals such as:

Offers such as these from national brands combined with Deals from SMBs will create a powerful pull for consumers.  As businesses experiment and launch no-cost ads, these offers will become the hook that entices and encourages a fresh group of consumers who are new to the check-in process. This is why Facebook's new Deal platform is a win-win-win:  Consumers will be encouraged to check in more often because of the deals available; businesses can drive more traffic and engage consumers with ads that cost nothing; and Facebook wins by increasing engagement on the platform.

As of now Deals are in beta, which means that offers can be launched only by a limited number of Place owners at this time. Those who are part of the beta can select "Create Deal" from the right side of their page. Four different types of deals can be created:

Although Facebook will not charge businesses for these ads, it is evident that there is tremendous revenue potential as this program grows.  Eventually businesses won't want to be just one of many ads that consumers see but will demand ways to differentiate and surface ads, which is how Facebook can eventually turn consumer check-ins and local ads into a new revenue stream.  Within a year or two, businesses will be bidding to have their deals gain more attention on the Facebook mobile platform, just as they currently do in Google AdWords.

Facebook Deals was just one of three announcements the company made today.  Another announcement was new functionality that mobile application developers may utilize to create a single sign-on on phones. Facebook's ability to become a de facto single sign-on for all mobile apps will depend not only on how developers adopt this functionality, but also on the level of trust that consumers have in Facebook.  Given consumers' concern over privacy, Facebook will have to work to earn more trust and educate consumers before large numbers of people will feel comfortable using Facebook to log into other mobile applications.

One outstanding question is how Facebook's new Places features will affect the fledgling LBS category. To date, foursquare has garnered most of the headlines, and it continues on an aggressive path of innovation.  But in the space of two short months, Facebook has launched and amended its own compelling check-in service with greater reach, more appeal to marketers and SMBs, and a wider variety of ad types than are available on foursquare and other LBS platforms.  I found it interesting to note that while foursquare was a visible Facebook partner at the announcement of Facebook Places two months ago, it was absent from today's Facebook event.  It seems evident to me that the LBS space is in for some profound changes in the coming year as Facebook Places becomes as familiar to Facebook users as status updates and fan pages are today.

For more information on Facebook Deals, check out the information below or visit Facebook's document on Scribd. 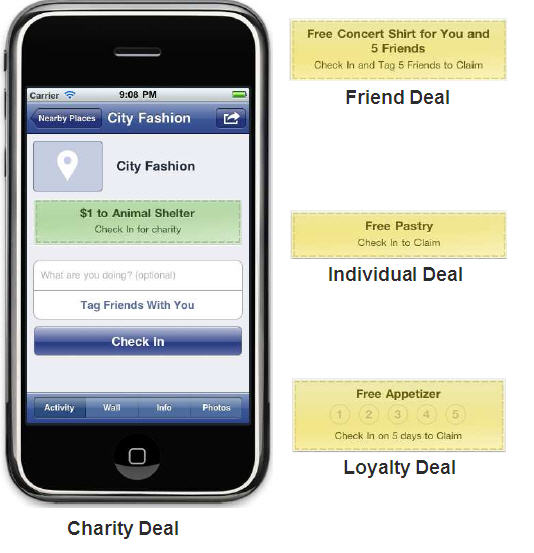 Michael O'Grady 13 hours ago
In 2023, we anticipate that two-thirds of global B2C e-commerce will come from online marketplaces.
Read More
Blog