In a blog post a week ago, I stated that Auto Direct Messages (Auto DMs) on Twitter are unwelcome. Many agreed that these preprogrammed messages sent to all new followers are annoying, but others vehemently disagreed. To bring clarity to the topic, we conducted a survey that was completed by 336 individuals. The results are unequivocal: People hate to receive Auto DMs, think less of those who send them, and are quite likely to unfollow the senders or even report them as spam.

My recommendation based on the survey results is short and sweet: Don’t send Auto DMs. There may be exceptions to this rule, but they are few and far between. This is because the actions of many others have already destroyed people’s expectations of and attitudes toward the medium of Auto DMs. Auto DMs are the unsolicited email spam and telemarketing of the social media world; sometimes those discredited tactics work, but usually they spark response from very few recipients while damaging the senders’ reputation and influence among many, many more.

No matter how much you rationalize that your Auto DM is more welcome, personal, social, authentic, or helpful than everyone else’s, the data from this casual survey speaks for itself: By a margin of 40 to 1, survey respondents who have an opinion on Auto DMs indicate they find them unwelcome and usually do not get any information of value in the Auto DMs they receive. Almost three-quarters of respondents chose, “I find Auto DMs to be unwelcome because they usually do not contain information I find valuable,” versus 2% who said, “I find Auto DMs to be welcome because they often contain information I find valuable.” 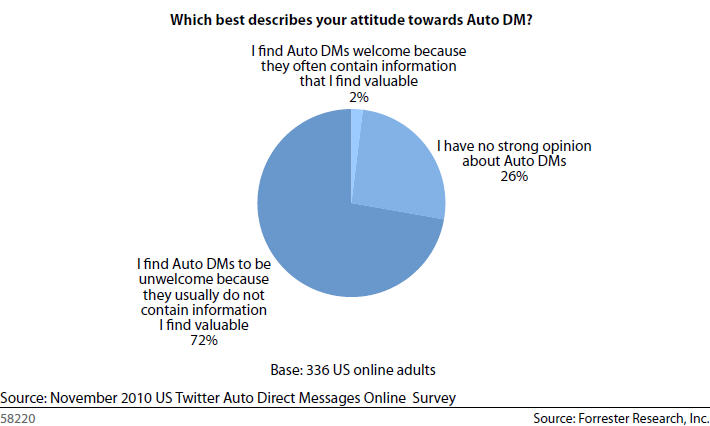 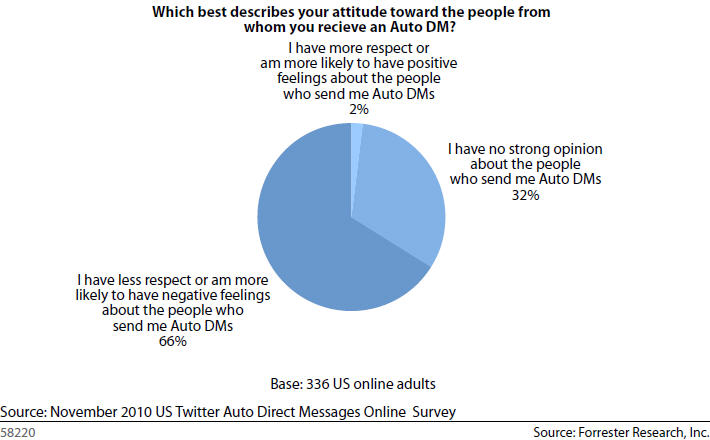 Not only do Auto DMs negatively alter perceptions, they also encourage negative behaviors. Four out of 10 people unfollow most of those who send Auto DMs, and one-third of recipients say they have reported someone who sent them an Auto DM as a spammer to Twitter. Twitterers who are reported as spammers are at risk of losing their accounts including their followers and content.

The survey participants tended to be much more engaged with Twitter than is average — those who completed the survey said they follow an average of 978 people, compared with a recent Forrester survey of online adults in the US that found the average was 77. But before you discount the findings as being unique to heavy social media users, you should know the sentiment was extremely negative among newer and less engaged Twitterers. For example, among the 39 respondents who joined Twitter in 2010 and answered the question, 18 (46%) find Auto DMs unwelcome, compared with two (5%) who find them welcome.

If you are among the 2.5% of survey respondents who send Auto DMs, I hope this data will convince you to alter this habit. There are very few scenarios under which sending Auto DMs will help rather than hinder your objectives on Twitter. If you are a Forrester subscriber, watch for an upcoming Twitter report that is in the works based on this and other data.

Stephanie Liu 5 days ago
Collecting data without infringing on consumers’ privacy and ultimately sacrificing their loyalty and trust is a new marketing imperative. Marketers must avoid regulatory fines and reputational damages and lead the conversation on consumer privacy. Data deprecation, new privacy laws, and the cookiepocalypse are coming. You’re now past the time to revise your approach to data […]
Read More