With its latest public cloud offering, T-Systems not only comes close to Amazon’s EC2 pricing, it might even be cheaper than Amazon. The €4 billion, German headquartered IT services firm announced today a public beta running from November 2010 to February 2011.

Although Amazon recently made a time-bombed version of its EC2 available for free, a real, unlimited service still costs in the range of $0.095 per hour for a small server of one core with 1.7 GB RAM in Europe. Last week, Forrester had the chance to look at a beta version of T-Systems’ public cloud offering. Although no pricing has been announced officially, the beta showed the price for a virtual machine of a similar size to the aforementioned Amazon machine starting at €0.2/hour. T-Systems inidcated that they even like to go below the Amazon pricing! T-Systems has been working for more than a year with cloud provisioning tools from Zimory to manage the virtualization of larger-scale server and landscape compositions. Leveraging this experience, T-Systems manages to drive efficiency even further than the current economies of scale, which makes this aggressive move possible.

Is T-Systems planning to seriously compete with Amazon in the future and does it make sense for a traditional large enterprise IT services and hosting firm to compete with low-price public cloud offerings? 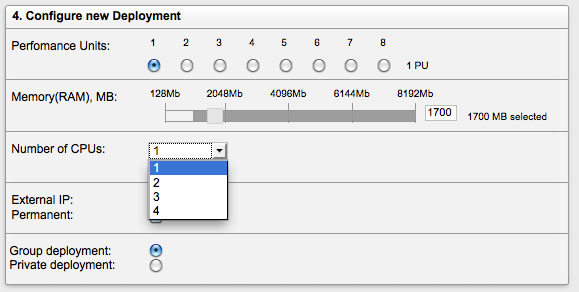 T-Systems’ current beta of a public cloud offering comes with an aggressive pricing model, which is cheaper than Amazon’s EC2 pricing level. (Shown here are the prices for a 1.7GB single core virtual machine.)

To answer this question, I’d like to turn it around for a second:

Does Amazon really compete with an enterprise hosting firm like T-Systems, which makes annually more than €1 billion in revenue with the operations of SAP servers in a modern dynamic infrastructure?

Well, Amazon is moving into this direction with its enterprise IT offering, but it is not yet perceived as offering the same level of security, trust, and reliability, especially by European customers. Forrester laid out its understanding of the difference between public, virtual private, and private cloud offerings in its cloud computing taxonomy and characterized the difference between Amazon’s and T-Systems’ focus.

We expect that Amazon will keep its core business in the area of highly scaled-out public cloud offerings, where it really differentiates itself from the traditional providers. This means that IT users wanting (or expecting) a higher SLA have a choice. They could use a third party that can refine a commoditized public cloud infrastructure like EC2 into an enterprise-ready cloud. Many platform-as-a-service (PaaS) offerings such as Tibco’s Silver and future cloud broker offerings follow this approach. Alternatively, users were able to select a different cloud infrastructure based on the different nature of workloads — until now. For example, they could use a dynamic enterprise hosting offering from T-Systems to run productive but already virtualized SAP systems and then use another public cloud provider to run test and development systems at a lower level of reliability and performance. Unfortunately, the security requirements for the latter might have been rather on the strict side due to legal compliance issues in Europe.

This is exactly the dilemma that T-Systems’ new public cloud offering will address. It’s a low-end cloud infrastructure-as-a-service (IaaS) offering with an appealing level of security and that is very closely integrated with the high-end part of a customer’s enterprise environment that is already hosted at T-Systems. Customers will be able to easily move virtual machines and large volumes of data (!) in hybrid models between more public-cloud-style offerings and the more enterprise-style virtual private offering. Thus, the new T-Systems Cloud will actually compete with Amazon’s EC2. But, frankly, both companies will only compete to this extend, to which Amazon will challenge T-Systems in its next generation agile large-scale enterprise infrastructure. As long as Amazon is not perceived as a major player in large enterprise hosting, T-Systems will not be perceived as a major public cloud player outside its customer base.

Is it a good idea for other large enterprise IT service providers to make a similar move?

This really depends on the maturity and nature of the customers you would like to retain as a service provider. If your customers only run packaged applications with very little of their own development, have lower security and regulatory requirements, or have a nearly constant demand of compute power, transforming your existing hosting service into a standardized pay-per-use offering with a high level of security, performance, reliability, and price will be fine. You won’t see many of your customers’ workloads shifting to public cloud offerings. However, if your customers are actually starting to move test and development or jobs with fluctuating performance demand to public clouds, you need to complement your enterprise IT offering with a public-cloud-style IaaS. Obviously, only $/€1 billion-plus IT services providers can deliver such a wide portfolio and have the internal economies of scale for a margin mix among the different levels of cloud computing.

Let my know what you think about this move of T-Systems is you are on the provider side. Have you considered adding an agressive low end offering to your enterprise services already?