I'd begun to think of LinkedIn as a sleeping giant — a company that had achieved success and was resting on its laurels, and those laurels were resting on increasingly thin ice. LinkedIn has become the de facto standard for professional networking and recruiting, but what had it done lately? Its groups seemed spammy (a problem that weakened Monster, once the undisputed leader in recruiting), and at least outwardly LinkedIn wasn't assertively innovating (an ailment that caused the downfall of Myspace).  But with a burst of new features, it seems the professional networking site isn't sleeping any longer, and I am particularly impressed with Signal, a new intelligence tool currently in beta.

In June, LinkedIn launched a refresh of its Groups interface, its first in almost two years.  Then two months after that, LinkedIn offered new and improved moderation tools for Groups, which has given more power to group managers to fight spam.  LinkedIn tells me that 1,000 groups are created and 100,000 members join groups every day.

Earlier this month, LinkedIn launched robust new Company pages; there is more to this enhancement than may first meet the eye.  Businesses can now showcase their products and services and begin to collect endorsements that help promote and differentiate their offerings.  I spoke with LinkedIn just eight days after the launch, and 25,000 companies had already loaded 32,000 individual products into LinkedIn.  Over on JetBlue's Products Page, you can see that First Bag Flies Free has been recommended by 26 people thus far.  There is room for improvement for how products and recommendations can be woven into the LinkedIn experience, but it's a great start. (Watch for LinkedIn to soon offer widgets that permit professionals to recommend products and services directly from brand sites — the professional version of the Facebook "Like" button.)

I also was offered the chance to experience LinkedIn Signal, a new insight-gathering feature currently in beta. It's an impressive new tool that for me quickly became a valuable news and trend filter.  Upon launching the Signal page, one can immediately view the status updates and tweets from their closest professional contacts.  In this way, it's a great method for tracking professional news and information, along the lines of paper.li and TwitterTim.es.

But Signal goes a step farther; it is also a terrific research tool.  One can structure and save searches based on one's network, hashtags, and others' industries, employers, regions or schools. Want to know what the folks at Facebook think of the movie "The Social Network"?  Or which people in the Bay Area attended the WOMMA Summit?  Or how agency professionals are reacting to new IAB guidelines?  Or perhaps you care to monitor what people are sharing about your employer (below).  It's all there for the taking. 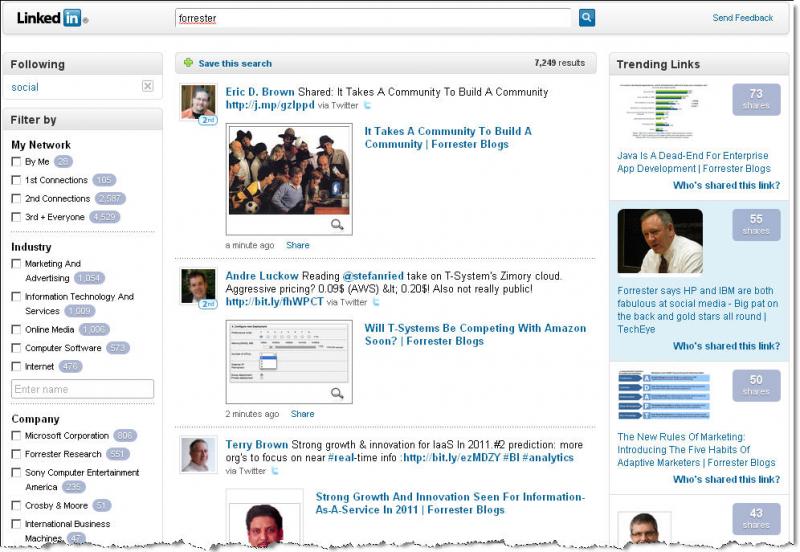 Signal will likely remain in beta until next year, and it is definitely a work in progress.  Sharing specific items in the Signal list is too difficult, and the ability to exclude and not just include specific companies, industries or people would help improve the value of the tool.  Still, it's a great idea and a very strong new offering from LinkedIn. For professionals overwhelmed by the never-ending stream of tweets and status updates, this tool is well positioned to become an important relevance filter for work-related news and information.

The innovation trend at LinkedIn is exciting.  I'm anxious to see how LinkedIn will continue to create new value for professionals in 2011.

Stephanie Liu 3 days ago
Collecting data without infringing on consumers’ privacy and ultimately sacrificing their loyalty and trust is a new marketing imperative. Marketers must avoid regulatory fines and reputational damages and lead the conversation on consumer privacy. Data deprecation, new privacy laws, and the cookiepocalypse are coming. You’re now past the time to revise your approach to data […]
Read More
Blog

Brendan Witcher 3 days ago
Wise retailers will be highly detail-oriented in their holiday strategies, especially given the macro-level conditions across many global markets.
Read More