I was really lucky this morning. I've been spotting the yellow eBay buses around town (San Francisco) recently. I love it when companies like eBay promote new services like their mobile application — it does so much to raise awareness and eventually demand for new services. There was one stopped next to my car when I got out of Starbucks this morning. Yay! I quickly set down my tea and reached for my phone to get a photo. The ads are promoting eBay applications for mobile phones. What I hadn't noticed were the individual QR codes helping people find the applications and download them. Companies like Target, Best Buy, and eBay using QR codes will increase awareness first of 2D bar codes and QR codes and second of the ability/option to connect with online content through your phone. 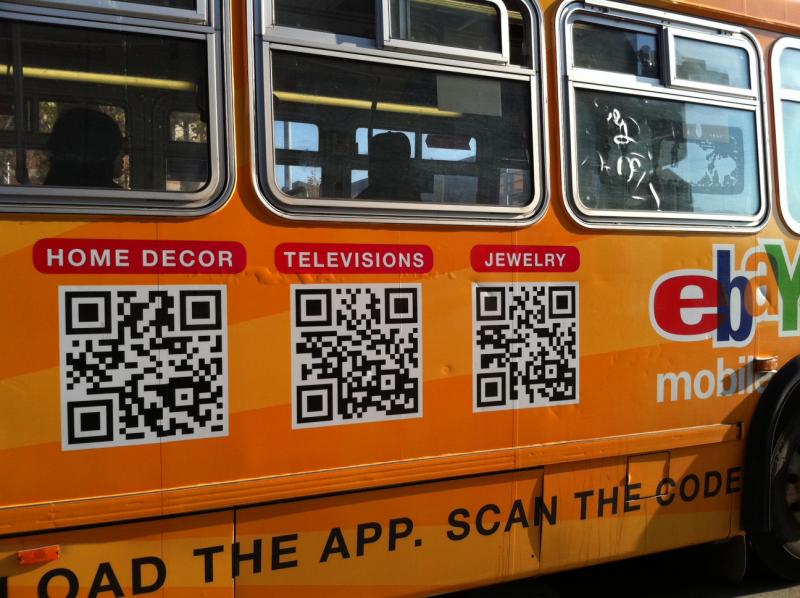 More importantly, eBay was in the news today because it reported a 146 percent jump in mCommerce sales on Cyber Monday. (See press release.) It has been public with its expectations of generating more than $1.5 billion in gross merchandise volume in 2010 compared to $600 million in 2009. I think this qualifies it as one of the hottest names in mobile commerce at least.

Why would someone put QR codes on a bus with little to no instructions re what to do with it? I don't know. I showed my 2-year-old nephew a QR code and asked him if he knew what it was (he's pretty savvy with an iPhone and iPad a.k.a. 'the big phone' … a SuperConnected in our Mobile Techno ladder if he were texting and could spell). He replied, "it's a square, silly." Ok, not fair to ask a 2-year-old, but the response of my adult friends is not much different. Only about 1% of US adults have used one of these applications in the past 3 months according to our research. eBay's customers are more mobile-savvy than the average US adult, so using these codes in advertising is not necessarily misaligned with its target audience.

What's up with QR codes? Technology is good. The idea is compelling. Too often, however, the user experience falls short. If this bus had been standing still for longer, I would have tried to scan one of these codes from various distances. I'm not exactly sure how close one would have to be to the bus or for how long the bus would need to stand still for a good read. The answer is probably within 10 to 20 feet if we're generous and one would need 10-20 seconds . . . retrieve phone from purse, turn on, decode, find app, open app, and scan. When I'm on a bus in San Francisco, it feels as though the bus moves slowly. When I'm on the street or in my car, they seem to travel very fast. How easy it would be to scan a code is an open question. "Load the app. Scan the code." It's a bus — not so much room for instruction. Typically, these codes are accompanied by a) more instruction around finding an app that can scan the code, and b) the benefits of scanning the code.

I hope this campaign does well. A company with the influence of eBay has the potential to drive awareness and adoption not only of shopping on handsets but also of 2D bar codes — a means of connecting to contextually relevant content. Exciting.

Discover how to deliver greater business value by building a natively digital brand and communications approach and tech stack.

Christina Schmitt 3 days ago
Technology is not the exclusive core expertise of IT anymore. For many years, technology has had a place in the B2B marketing strategy and represents a big part of marketing’s responsibility. In addition to implementing and running the relevant marketing technology, marketing requires the knowledge to use it effectively to drive the revenue engine, create […]
Read More