This will be an unusual post for me. No big industry event to comment on, no data to reveal. Nope. Today, I'm just sharing with you how much fun I (and 5 million other people by year-end) am having with Kinect. 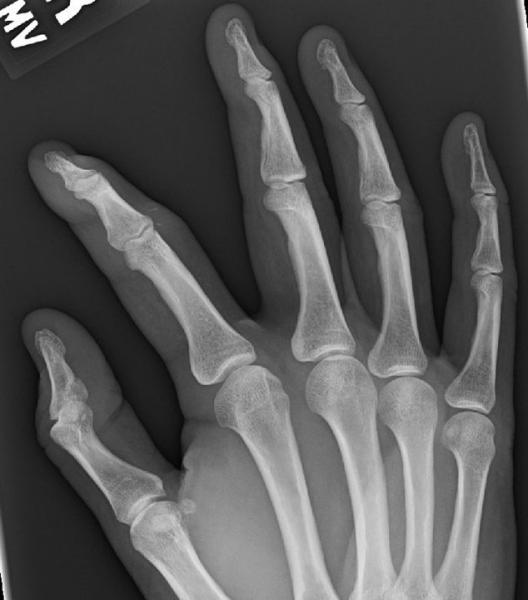 Yes, that is my hand, and yes, that is more of me than you expected/wanted to see. If you look closely at the big knuckle on my index finger, you'll see two white slivers embedded in the flesh above the knuckle. Those are slivers of glass. They are embedded there because in going up to smash a volleyball over the virtual net, I slammed my finger through a lightbulb, tearing the flesh from my knuckle and allowing random pieces of glass to find their way into my finger.

No, I am not going to sue Microsoft (though I'm sure someone else will eventually try, which is why Kinect is absolutely peppered with warnings to be careful, they are clearly anticipating a lawsuit at some point).

It turns out I'm not alone. Search YouTube for "Kinect Fail" and you will find lots of video of people elbowing each other, smacking each other on the head, and so on. In my older New England home, all of my guests above six feet tall have a tendency to smash the ceiling with their hands — one very tall friend actually did the long jump with such enthusiasm that he smashed his head into the ceiling. Both the ceiling and the head survived in tact.

Why burden your day with this image? No, I don't want sympathy cards when I go in for surgery in two weeks to remove the glass slivers. Instead, I want to point out something very interesting. The reason these injuries occur is simple: Kinect feels very, very real. When you play it, you have a tendency to lose your sense of space and placement in the real world. Because your mind wants to smash that volleyball, execute that triple flip stunt, and be a dance floor queen. This is different from Wii injuries, which tend to occur because people lose their grip on the Wiimote and it crashes into something or someone it was not intended for. Those injuries are a reminder that you are interacting with a substitute for your real body. With Kinect, your body is the controller, and it leads to these types of injuries.

All whining about how much room you have to have in your house to really exploit Kinect aside, this experience is very remarkable. No, it won't change what we today call gaming — something I've had to write several times now and remind people of often — because first-person shooters and other staples of gaming are not well suited to this. But it will create a foundation for some very cool experiences, most of which will have nothing to do with gaming. Lately I've been toying with an immersive reenactment of the march from Lexington to Concord and the opening volleys of the Revolutionary War. How could Kinect bring that to life? How could I experience it? What could I learn from it and what cool shoot-em-up experience could I indulge in along the way? For fans of alternate history, could such an experience allow me to rewrite history by being the first to fire on Lexington Common? Can aliens join in and change the balance of world politics entirely? You can see very quickly that what I'm describing is not a single "title" but a platform that allows players and even developers to mod and hack the environment. Think of it as Spore, but with way more creative flexibility for individuals plus a business model for developers to get in on the action.

I've clearly been thinking about this for a while; it is part of a big question I'll be tackling next year: What will we call the new experiential medium that will result from natural user interfaces+3D+touch interfaces+augmented reality — technologies which are all conspiring in this decade to alter our lives? This part game, part narrative, part interactive, part video, potentially collaborative, experience-rich medium could, in 2020, be a $10 billion business. More interesting to me, who will be the Shakespeare, Cervantes, or Kurosawa of this new media? Or should I ask who will be the Bell, Edison, or Jobs of this new technology ecosystem?