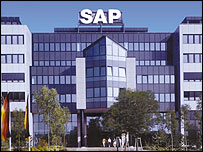 It's nice to see that SAP has managed the turnaround to leave the recession behind and pick up growth again. The company reported a strong 34% SW revenue growth in Q4 2010 as compared with the previous year – "The strongest software sales quarter in SAP's history" as stated by Co-CEO Bill McDermott. However, one has to keep in mind that one year ago SAP was in deep crisis and reported a YoY -15% SW revenue decline in Q4 2009 followed by the departure of CEO Léo Apotheker in February 2010 and other subsequent executive changes.

The new Q4 2010 revenue announcement is a very positive and promising signal, but the company needs to continue to innovate its portfolio to accelerate again new SW revenues for long-term sustained growth.